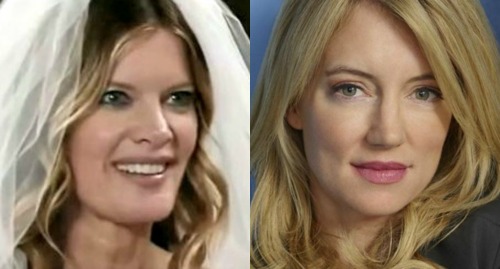 General Hospital (GH) spoilers tease that Michelle Stafford’s (Nina Reeves) time at the ABC soap is winding down. She’s still filming at the moment, but she’ll wrap things up once she finishes her contract in May. With that in mind, we can consider what Stafford’s final episodes might look like.

Of course, GH writers haven’t disclosed exactly how they intend to tackle this. It’s possible they did some story tweaking to make sure Stafford’s Nina was around for the biggest shockers. Then again, the Sasha Gilmore (Sofia Mattsson) revelation was probably already planned for May sweeps. It’s probably just a matter of any adjustments they might’ve made regarding what comes next.

Whatever the case, here’s what’s left for Stafford before she’s replaced by Cynthia Watros, who begins filming in early June. General Hospital spoilers say Nina will remain on cloud nine over her “daughter” being in town. She’ll do her best to make Sasha’s stay in Port Charles permanent, but her plan won’t go over well with Valentin Cassadine (James Patrick Stuart).

GH fans saw Nina try to play Cupid for Sasha and Michael Corinthos (Chad Duell). You can expect Nina to kick her matchmaking efforts up a notch, but Valentin will hope to stand in her way. That could result in some suspicions if Valentin isn’t sneaky about it. General Hospital spoilers hint that there may be some other close calls before Nina’s ultimately brought in the loop.

Meanwhile, GH viewers will see more conflict between Nina and Willow Tait (Katelyn MacMullen). Nina may feel the need to step up for Aiden Webber (Jason David) in some way, but her pushy attitude never works out. Willow may try to play nice for the sake of her job, but Nina will still be an unnecessary complication in her life. She’ll have enough on her plate with all the Dawn of Day chaos!

Naturally, Nina will attend the Nurses Ball, where drama is always just around the corner. She’s also been planning her wedding to Valentin, which should be coming up soon. It was arguably a big blunder to have Curtis Ashford (Donnell Turner) marry the new Jordan Ashford (Briana Nicole Henry) when we weren’t even used to the recast yet. GH probably won’t make that mistake with “Valentina.”

It’s clear that Stafford’s Nina and Valentin are the way to go here. It sounds like the nuptials may be part of May sweeps, so that’ll be long before Watros takes over. In fact, this wedding is the prime setup for Sasha and Valentin’s secret to come out.

After that, what’ll be left for Stafford’s Nina to accomplish? She might take steps toward truth about her real daughter, which still seems to be Willow. Stafford might even get to play that big reveal, but that’d be pushing it. General Hospital likes to drag things out, so they may not be keen on burning through too many revelations too fast.

GH fans will also see Valentin fight for love, but Nina should shut that down pretty fast. It’s safe to say she’ll want nothing to do with Valentin after his deception’s exposed. Basically, we should get a bitter, broken Nina as we approach Stafford’s final episodes. On the bright side, maybe Stafford will get some solid Daytime Emmy reel material for the road!

You can always catch Stafford back on The Young and the Restless after she soap hops, so that’s good to know. We’ll give you updates as other GH news comes in. Stay tuned to the ABC soap and don’t forget to check CDL often for the latest General Hospital spoilers, updates and news.