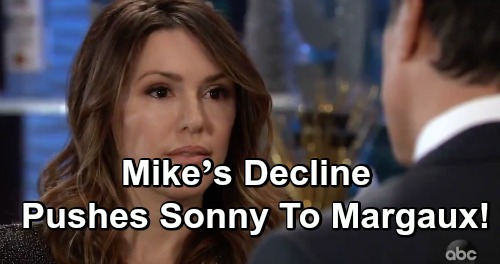 General Hospital (GH) spoilers tease that Sonny Corinthos (Maurice Benard) and Carly Corinthos (Laura Wright) will face some difficult decisions. Some of those decisions will involve their relationship, which could be on shaky ground thanks to Margaux Dawson (Elizabeth Hendrickson). Sonny just can’t seem to stay away from the DA and that’s left Carly with major concerns.

Is Margaux a real threat to “CarSon” or is Carly overreacting? Regardless, ignoring Carly’s worries could bring more issues. Since a bond is definitely forming, GH may indeed have a spark in mind for Sonny and Margaux. He may try to resist it at first, but what happens when his life becomes more chaotic and painful? That’s exactly what’ll happen in the weeks ahead, so things could get tricky.

General Hospital spoilers say Mike Corbin (Max Gail) will continue his steady decline. As his Alzheimer’s progresses, his mental state will get worse and worse. Mike will enter a tougher stage and it’ll really throw Sonny for a loop.

In some ways, Sonny has tried to prepare for the inevitable. In other ways, he’s been living in denial. Sonny doesn’t seem to fully grasp Mike’s decline just yet, but he’s about to. GH fans can expect some hard days for Sonny as he wraps his head around losing his father.

Mike has gotten to the point where he sometimes doesn’t recognize Sonny. It may not be long until he can’t remember Sonny at all. How will Sonny react when his dad never has moments of clarity? It could sink him to a dark place and bring more marital woes.

Carly will want to be there for Sonny, but he may find himself leaning on Margaux instead. Sonny’s already apologetic about killing Margaux’s father, but this could add to his regrets.

He’ll realize just how much dads can matter and how rough it is when they’re gone – or gone mentally in Sonny’s case. It may be a while before Mike actually dies, so that’ll be something else for Sonny to brace for.