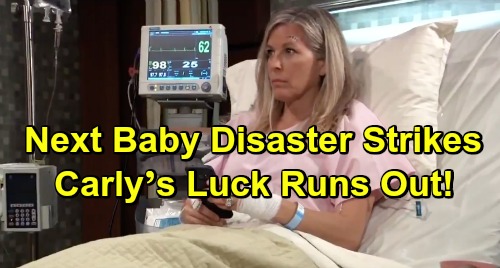 General Hospital (GH) spoilers tease that Carly Corinthos (Laura Wright) will continue to prepare for her bundle of joy. Thanks to the brutal ordeal Ryan Chamberlain (Jon Lindstrom) forced her to endure, GH viewers grew concerned. The question on everyone’s mind was whether Carly’s baby would survive.

That’s why it was kind of a letdown when GH didn’t turn into a big deal. Jason Morgan (Steve Burton) simply told Carly that the OB-GYN came by and confirmed everything was OK. It was nice that Carly awakened to good news, but the revelation fell flat. Where’s the drama?!

Fortunately, that drama is undoubtedly still to come. Carly’s unborn child made it through this dangerous trauma, but what happens when there’s inevitably more? Sonny Corinthos’ (Maurice Benard) mission will bring additional stress for Carly. She’ll battle serious worries next week, which could involve Sonny or perhaps her baby if complications arise after all.

Of course, we should also remember Ryan could still be out there. General Hospital spoilers hint that Ryan may return to stir up one last round of trouble. Since Ryan’s a guy who likes to finish what he starts, Carly might land in peril once again. It seems more likely that vengeful Ava Jerome (Maura West) will handle things this time around, but you can never rule out any risks when it comes to Ryan.

Even if Carly manages to get by without another baby incident for a while, there could be another one after Oscar Nero (Garren Stitt) loses his life. Oscar’s death will certainly take a toll on Josslyn Jacks (Eden McCoy), so Carly will suffer heartbreak right along with her. The emotional toll this takes won’t be good for the baby.

There may even be some other shocker that arises along the way. General Hospital spoilers say the Nurses Ball is coming up, which tends to bring some danger and chaos. It’s possible Carly will get caught up in something then or down the road. May sweeps would be another great opportunity for baby mayhem to strike.

Bottom line, GH fans shouldn’t expect Carly’s pregnancy to go smoothly. She may have avoided disaster for now, but there’s a good chance the next time Carly won’t be so lucky. Will Carly suffer a miscarriage eventually or at least face a true scare? We’ll give you updates as other details emerge. Stick with the ABC soap and don’t forget to check CDL often for the latest General Hospital spoilers, updates and news.