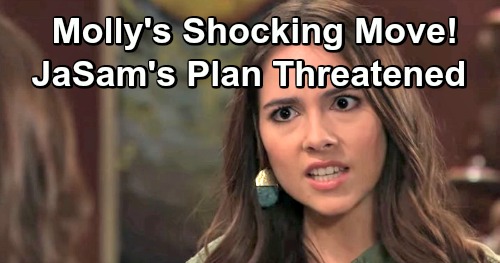 Molly believes someone needs to call the police, so will she ruin Sam and Jason’s (Steve Burton) chance of taking Shiloh Archer (Coby Ryan McLaughlin) down? General Hospital fans know Sam is undercover, but Molly thinks her sister has completely lost her mind. She has no idea that Jason was behind Kristina’s disappearance or that Sam is aware of this.

All Molly knows is Kristina is missing, and no one seems to be too concerned. Will Sam manage to keep Molly from calling the cops when she’s convinced someone at DoD hurt Kristina? Shiloh has often invited Jason to come by the house and take his classes. The doors weren’t locked, so Jason didn’t break into anything. Jason was there to see a resident of the home, so breaking and entering would be a stretch.

The only crime Jason could be charged with is kidnapping and Kristina would have to do that. Shiloh can’t do anything besides threaten Jason without exposing his cult. Molly is not about to let this go when she doesn’t know what happened to Kristina. Eventually, someone will have to let Molly in on the plan and tell her where Kristina is. She could blow the whole scheme if they leave her in the dark!

GH spoilers say Molly might be most reassured if Jason filled her in. She knows he’s not involved in DoD and never would be. However, Molly is dating the police commissioner’s son, so Jason might have concerns about spilling. He can’t know what Molly might reveal to T.J. Ashford (Tajh Bellow) and what T.J. might reveal to Jordan Ashford (Briana Nicole Henry).

How will Sam and Jason convince Molly to stay quiet if they don’t tell her where Kristina is? Will Molly believe that Kristina is OK without seeing her for herself? The more people who know where Kristina is, the greater the chances of Shiloh or one of his followers finding her.

The challenge here is to placate Molly while keeping Kristina safe at the same time. General Hospital spoilers say Jason and Sam will work to pull that off, but they’ll certainly run into some trouble. We’ll give you updates as other GH news comes in. Stick with the ABC soap and don’t forget to check CDL often for the latest General Hospital spoilers, updates and news.