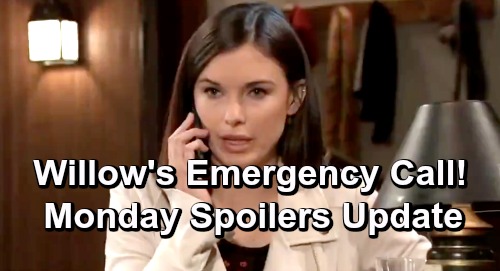 General Hospital (GH) spoilers for Monday, April 15, tease that Sam McCall (Kelly Monaco) will have to keep up the ruse. Shiloh Archer (Coby Ryan McLaughlin) will be on a mission to find Kristina Corinthos-Davis (Lexi Ainsworth), but Sam can’t tip him off to what really happened to her. She’ll admit that something must be wrong, but she won’t give Shiloh any hints about Jason Morgan’s (Steve Burton) involvement.

However, Shiloh will figure that out for himself when he spots Brad Cooper (Parry Shen) with the swiped cup later. Jason will give the cup to Elizabeth Webber (Rebecca Herbst), who’ll hand it over to Brad in the lab. Once Shiloh spots Brad with evidence that could be used against him, he’ll demand to know where Brad got it. Although Brad may not reveal that, Shiloh will assume Jason is responsible.

General Hospital spoilers state that Brad will face intense pressure. Shiloh will hope he can ensure that the test results come back negative for drugs. If he can eliminate the need for a test entirely, that’d be even better. While Shiloh manipulates Brad, Jason will tell Carly Corinthos (Laura Wright) and Michael Corinthos (Chad Duell) about his strategy. He’ll hope the cup is the key to taking Shiloh down.

Obviously, Jason won’t realize it’s been intercepted at that point. His plan is about to hit a huge snag thanks to Shiloh’s luck and perhaps Brad’s weakness. GH spoilers say Willow Tait (Katelyn MacMullen) will still have Kristina on her mind in Monday’s episode. She’ll decide to set up an emergency meeting by phone, and it looks like Michael will be the one she calls.

General Hospital spoilers reveal that Michael will connect the dots on Monday. He might learn that Willow gave up Shiloh’s baby for adoption. Some tidbits from Willow’s loyalty pledge could also come up since that’s what this meeting will be about. She’ll want Michael to know that Kristina must’ve handed over ammo. The trust offering is an essential part of initiation, so Michael will battle concerns.

Michael will talk to Jason and Sonny Corinthos (Maurice Benard) about Willow’s news later. They’ll mull over what Kristina might’ve divulged and guess that it was one of Sonny’s crimes. Of course, GH viewers know Alexis Davis (Nancy Lee Grahn) is actually at the center of Kristina’s trust offering. Her loyalty pledge was all about how Alexis murdered Kiefer Bauer (Christian Alexander).

While the Shiloh chaos heats up, Valentin Cassadine (James Patrick Stuart) will push Nora Buchanan (Hillary B. Smith) to help him out. Since Lulu Falconeri (Emme Rylan) abruptly left the country, Valentin will want their custody agreement revisited. He won’t be willing to fly Charlotte Cassadine (Scarlett Fernandez) back and forth to Paris every two weeks, so he’ll hope Nora can address this situation.

Across town, Spencer Cassadine (Nicolas Bechtel) will blab about Valentin’s blackmail. He’ll fill Nina in on her fiancé’s actions and wonder if she can make Valentin back off. Alas, Spencer’s plot will flop and most likely make things worse. At Cameron Webber’s (William Lipton) school, he’ll get into a physical fight. It won’t he long until Franco Baldwin (Roger Howarth) arrives and demands answers.

Cam will confess that another teen called Aiden Webber (Jason David) a homophobic slur, so he fought with him over it. When Liz and Franco suggest Aiden could identify as gay eventually, Cameron will be thrown. He’ll have a response that Franco deems off-putting, so that’ll bring some clashing for this stepdad and stepson.