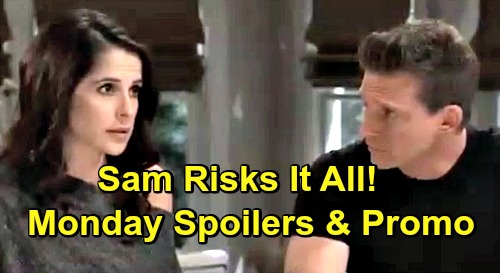 General Hospital (GH) spoilers for Monday, April 29, tease that Dr. Kevin Collins (Jon Lindstrom) and Ava Jerome (Maura West) will put their plan in motion. As part of their scheme to dupe Ryan Chamberlain (Jon Lindstrom), they’ll hold a memorial service. Of course, it’ll actually be more like a gathering to trash talk the serial killer and say goodbye, good riddance, than a funeral!

It looks like Laura Webber (Genie Francis) will dump some wilting flowers on Ryan’s grave. She’ll declare that he lost and they won. Felicia Scorpio (Kristina Wagner) will also look satisfied as they bid farewell to Ryan and the nightmares he caused.

However, they all know there’s a good chance Ryan’s still alive. This is just a great way to help Kevin and Ava sell their story.

Once step one is done, they can move on to step two. General Hospital spoilers say a very public breakup may be on the way for Laura and Kevin. Lucy Coe (Lynn Herring) will be aghast in Monday’s episode, so that may involve Laura’s treatment of Kevin.

Then again, it could involve the plot if they let Lucy in the loop. It’d be wise to contain it though since they won’t want this circle too big.

The DA will wonder if Chase and Valerie are sure Kristina’s family doesn’t know where she is. They may be hesitant to divulge much since Margaux’s been having sessions with Shiloh Archer (Coby Ryan McLaughlin).

Nevertheless, Margaux will make an admission on Monday. Could she be pretending to be interested in DoD? Is Margaux just feeling things out and seeing what Shiloh’s up to?

If Margaux’s conning Shiloh, that might be a good reason to come clean to her. Whatever the case, Sam McCall (Kelly Monaco) will be ready to make a bold move. She’ll tell Jason Morgan (Steve Burton) and Sonny Corinthos (Maurice Benard) that they have to get into the DoD records room. Sam will be determined to find out what Kristina’s trust offering is.

It appears Shiloh will also gain another follower in Monday’s GH episode, so he should be happy about that.

Next, General Hospital spoilers say Dr. Neil Byrne (Joe Flanigan) will have a tense chat with Sonny. He’ll be reassured that no one’s going to find Kristina or expose the doc’s involvement.

Neil will wonder what’ll happen if Sonny’s wrong. He’ll worry about legal consequences, but mostly he’ll just fear they won’t be able to get through to Kristina in time.

Back with Lucy, she’ll listen to Franco Baldwin’s (Roger Howarth) idea for the Nurses Ball. Will it be a legitimate one or just Franco’s quirky attempt at humor? Either way, Lucy will listen up and weigh in on the suggestion.