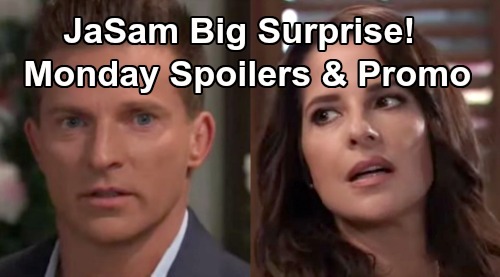 General Hospital (GH) spoilers for Monday, August 26, tease that Hamilton Finn (Michael Easton) will ponder the test results he just received. He doesn’t know how this is even possible, so he’s clearly struggling to understand Sasha Gilmore’s (Sofia Mattsson) illness. Epiphany Johnson (Sonya Eddy) will ask if whatever it is can be treated, but Finn may not be 100-percent sure at this point.

Another round of test results will leave Finn truly shocked later in the week. As for Sasha, she’ll express her gratitude to Nina Reeves (Cynthia Watros) on Monday. Sasha will warm Nina’s heart by telling her how much she’s appreciated. Of course, Nina will let Sasha know she’s thankful for her, too. Sasha may feel guilty enough to nearly come clean, but her secret will remain under wraps for now.

Over with Jasper “Jax” Jacks (Ingo Rademacher), he’ll meet up with Hayden Barnes (Rebecca Budig) to discuss their plan. Hayden may ask how Jasper’s time with Liesl Obrecht (Kathleen Gati) went. Liesl can be a real handful, but it looks like Jax will view her as a helpful ally.

Other General Hospital spoilers say Willow Tait (Katelyn MacMullen) will have some concerns. She’ll share those concerns with Harrison Chase (Josh Swickard) on Monday, but their conversation won’t be a catastrophic one. Chase will smile lovingly as Willow asks what if they do this and it ruins everything. She’ll sport a slight smile as well, so these worries of her won’t be anything Chase can’t fix.

There’s no word yet on what Willow thinks they could ruin, but GH spoilers say she’ll try to turn her year around on Monday. 2019 hasn’t been all that great for Willow so far – with the exception of meeting and falling for Chase! All the Shiloh Archer (Coby Ryan McLaughlin) chaos has been a lot to deal with.

Willow will hope the rest of the year works out better for her, and she’ll take steps to make sure that happens. You can bet Chase will back Willow up every step of the way. Meanwhile, Diane Miller (Carolyn Hennesy) will be dragged to a workout session. She’ll join Alexis Davis (Nancy Lee Grahn) for what we can assume will be hilarious moments in their new class.

At the Corinthos house, a happy couple will prepare to renew their vows. Carly Corinthos (Laura Wright) and Sonny Corinthos (Maurice Benard) will be ready to commit again in front of their closest loved ones. Before the ceremony begins, Kristina Corinthos (Lexi Ainsworth) will have a little fun with Sam McCall (Kelly Monaco). She’ll drop a huge hint by suggesting there’s another couple who could stand to appreciate each other.

Jason Morgan (Steve Burton) will arrive in time to get in on this chat. Kristina will undoubtedly wonder when Jason and Sam are going to remarry, but they’ll probably just keep the focus on “CarSon.” This is Sonny and Carly’s special day, so any “JaSam” wedding plans will have to wait.