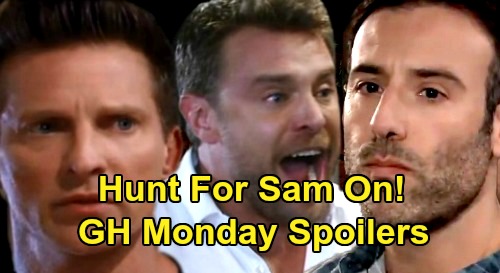 GH fans know that’s the case since Shiloh Archer (Coby Ryan McLaughlin) is holding Sam McCall (Kelly Monaco) hostage. He just called Jason Morgan (Steve Burton) and warned he’d have to follow orders. If Jason doesn’t do what he’s told, Shiloh will make sure he never sees Sam alive again. Of course, Jason will fight back in a big way. He’ll march over to Shiloh’s motel room, put him in a head lock and demand to know where Sam is.

Shiloh won’t let Jason put any fear in him. He knows he’s got the power here, so he’ll make it clear that the clock is ticking. It turns out Sam’s trapped in a freezer, so Shiloh will push Jason to listen up and make a decision. He can agree to the memory procedure and essentially become the old Drew Cain (Billy Miller) or else Sam will die.

General Hospital spoilers say Drew, Curtis Ashford (Donnell Turner) and Sonny Corinthos (Maurice Benard) will do their best to stop Shiloh. They obviously missed their chance to warn “JaSam,” but they’ll hope to make it over to the motel and help Jason out. Meanwhile, Carly Corinthos (Laura Wright) will offer some advice. She’ll sit down for a chat with Kim Nero (Tamara Braun) in the park and suggest that maybe Kim’s right.

Kim told Elizabeth Baldwin (Rebecca Herbst) she was thinking about leaving Port Charles, but Liz encouraged Kim to stick around. Carly, on the other hand, will believe a change of pace and scenery might do Kim some good. She may not think Kim should leave permanently, but some time away probably wouldn’t be a bad idea. It could help Kim distance herself from her crushing grief.

Other General Hospital spoilers say Neil Byrne (Joe Flanigan) will struggle with complex feelings for Alexis Davis (Nancy Lee Grahn). As they continue to bond, Neil and Alexis will nearly lock lips. GH viewers will see Neil cut ties with Alexis as a patient. He’ll feel like this is wrong, unethical and downright dangerous. Neil has tried to help Alexis, but he just won’t think this is healthy anymore.

Alexis will understand where Neil’s coming from, so this should give them a shot at exploring how they really feel – but only if they’re willing to take the leap. They’ll drag their feet, but it wouldn’t hurt to go on a date soon. Alexis may never truly be over Julian Jerome (William deVry), but that doesn’t mean she can’t be attracted to and find happiness with someone else.

Speaking of Julian, he’ll enjoy holding “Wiley Cooper-Jones” on Monday. Julian will get an opportunity to be in Grandpa mode, so he’ll love every second of it. He’ll also tell Lucas Jones (Ryan Carnes) that he wants to show him something important. Whatever it is will bring a moment of connection for Julian and Lucas, so it’s great to see their relationship is growing. Too bad deception could tear it apart!

Elsewhere, Liesl Obrecht (Kathleen Gati) will lash out at Brad Cooper (Parry Shen) for trying to kill her. She’ll accuse Brad of shoving her into the harbor, so expect some tense scenes. Despite Liesl’s angry allegations, she’ll assure Brad that his “Wiley” secret is safe for the time being. Even so, Brad will have to worry about how long Liesl can stay tight-lipped.