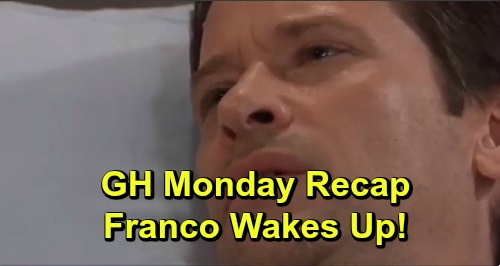 General Hospital (GH) spoilers recap for Monday, December 16, reveal that the auction got underway at the Jerome Gallery. Laura Collins (Genie Francis) requested a moment beforehand to talk with Valentin Cassadine (James Patrick Stuart) about Charlotte Cassadine (Scarlett Fernandez). When Laura mentioned the secret bodyguard, Valentin was dumbfounded and didn’t know what she was talking about. Laura decided that she believed Valentin.

Meanwhile, across the gallery, Nina Reeves (Cynthia Watros) and Ava Jerome (Maura West) put their heads together and privately toasted their plan, with Ava noting that “none of these fools will know what hit them.” Curtis Ashford (Donnell Turner) then came along and pulled Nina aside, telling her about re-running the DNA tests on her and Sasha Gilmore (Sofia Mattsson) and getting the same results. Curtis noted that Nina didn’t seem surprised, which puzzled him.

Jasper “Jax” Jacks (Ingo Rademacher) was present, too, but got called away by Nikolas Cassadine (Marcus Coloma), who was hiding out in the gallery’s storage room. Nikolas revealed that he was watching the goings-on inside the gallery via the security feed. He told Jax that he had a contingency plan to get the portrait in the event that Jax didn’t win the bidding.

Suddenly, Laura took over Jax’s spot and increased the bid to $450K. The bowtie guy left, bowing out of the bidding, and a server suddenly spilled a tray of drinks over Valentin, impeding his ability to bid. That left Laura the big winner, and she was thrilled. But suddenly, the paining erupted in flames. Valentin and Laura stared in horror as the painting burned, while Nina and Ava smirked knowingly. And as he watched from the storage room, Nikolas was absolutely beside himself.

Meanwhile, at GH, Anna Devane (Finola Hughes) noticed that Peter August (Wes Ramsey) was in Franco Baldwin’s (Roger Howarth) room talking with Andre Maddox (Anthony Washington). Peter was there to monitor the situation closely, since he doesn’t want Franco to wake back up with Drew Cain’s (Billy Miller) memories. Anna then spoke with Peter privately, wondering what he was doing.

Anna quizzed Peter about how he was feeling, considering he just shot a man who might die. Anna seemed to notice that Peter wasn’t the least bit upset about the shooting, and she didn’t like it. She asked a few more questions, and Peter wondered why she was giving him the third degree. Anna covered by saying she just wanted him to be aware of the kinds of questions the police would inevitably ask.

Down the hall, Elizabeth Baldwin (Rebecca Herbst) and Cameron Webber (William Lipton) learned some disturbing news. They heard from Andre that “Drew” had signed a DNR order before the procedure, which upset Cameron. Cameron then remembered that “Drew” had asked Cameron to hang onto his phone, and he wondered what that was all about.

Andre then updated everyone that the thug who Peter shot didn’t make it. Peter, who was present for this, was clearly relieved and Anna noticed his reaction. Elizabeth, Cameron, and Andre then went to Franco’s room, where Franco’s heart rate spiked, and his eyes started fluttering open. He eventually opened his eyes and Elizabeth called out to him.

Next, Willow Tait (Katelyn MacMullen) continued to struggle with the issues dredged up during her recent pregnancy scare. She and Harrison Chase (Josh Swickard) were at Kelly’s when Hamilton Finn (Michael Easton) and Violet Barnes (Jophielle Love) came in. Willow excused herself and went outside, where she encountered Maxie Jones (Kirsten Storms) and her son. Maxie soon sensed that something was wrong, and Willow revealed that she was still hurting from having given up Wiley Cooper-Jones (Theo and Erik Olson).

Finally, Lulu Falconeri (Emme Rylan), Dustin Phillips (Mark Lawson), Charlotte, and Rocco Falconeri (O’Neill Monahan) went to the Metro Court for ice cream. After Charlotte asked if Lulu and Dustin were boyfriend and girlfriend, they had a private conversation about their status, and they decided to see each other alone later for some adult time. And at the bar, Rocco and Charlotte enjoyed their ice cream, and Charlotte mentioned something about her secret bodyguard, which Rocco kidded her about.

Later, the four went to the dock to get Charlotte hone, and Rocco continued to jab Charlotte about her “imaginary” secret bodyguard. Charlotte then decided to prove to Rocco that the bodyguard exists and jumped into the water to provoke a rescue.