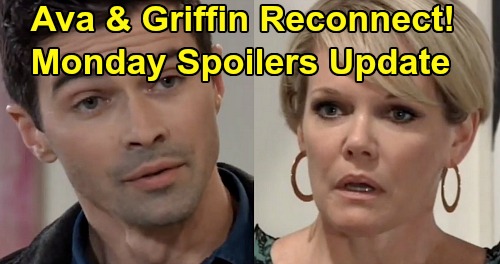 General Hospital (GH) spoilers for update Monday, December 9, teases that Valentin Cassadine (James Patrick Stuart) will want the scoop from Nina Reeves (Cynthia Watros). He’ll confess that his gallery portrait hunt didn’t pan out, so he’ll hope Nina had better luck with Ava Jerome (Maura West). Valentin will wonder if Ava offered up anything useful, but it seems Nina will keep what she learned to herself.

Nina discovered a ring with the Cassadine crest under Ava’s bed, and Ava recognized it was one belonging to Nikolas Cassadine (Marcus Coloma). That led Nina to the conclusion that Nikolas was alive and behind Ava’s “ghostly” visit. Nina decided they should team up and stop the Cassadine men’s mind games, so the logical step is playing a few mind games of their own.

Of course, Nina’s already been doing a little of that by pretending she’s forgiven Valentin. She’s actually been plotting to destroy him, but that plan’s a bit up in the air. Nina’s torn between revenge and her desire for a happy family, but finding that ring seemed to strengthen her takedown resolve. Perhaps Nina just feels like all the Cassadine men are scum at this point.

Whatever the case, Nina should leave Valentin in the dark on what she figured out. Valentin will get the feeling that things aren’t what they seem, but he won’t learn the truth just yet. Over with Jasper “Jax” Jacks (Ingo Rademacher), he’ll lash out at Nik once again. This has practically become an everyday activity for Jax, so he’ll be sick and tired of putting up with his partner in crime.

Jax will sarcastically urge Nikolas to pay Valentin a visit. He’ll almost be ready to wash his hands of all this, but Nina could come along with a proposal eventually. She’ll contemplate taking on another secret ally on Monday, and Jax might be a good fit. If Nina and Ava want to take down both Valentin and Nik, Jax’s assistance could prove quite valuable.

Ava will thankfully be out of Shadybrook and back in business thanks to Nina’s detective work. She should have more clarity about what she wants to accomplish – meaning vengeance! At the gallery, Ava will get a huge shock. Her eyes will widen at the sight of someone, so that could be Dr. Griffin Munro (Matt Cohen). General Hospital  spoilers says He’ll pop in the gallery to see Ava on Monday, which will lead to a conversation about why he returned to Port Charles.

Griffin came back to town after Carly Corinthos’ (Laura Wright) phone call. She wanted Griffin to give his opinion on Lucas Jones’ (Ryan Carnes) case, so the good doc came running. Griffin considered Lucas a friend during his time at GH, so he’s determined to help however he can. He’ll talk to Ava about that as well as how he’s been doing – which seems to be much better these days.

Griffin was a bitter man when we last saw him, but he’s looking great and appears to have a more positive attitude. Ava’s still working on that, but she’ll at least feel better knowing she’s not insane. Nikolas is indeed alive, so Ava will focus all her energy on exposing him and making him pay for exploiting Kiki Jerome’s (Hayley Erin) memory.

Trina Robinson (Sydney Mikayla) will also be on hand to pitch in at the gallery. Ava and Trina scenes have become a real treat, so stay tuned to watch their bond grow. Next, “Drew Cain” aka Franco Baldwin (Roger Howath) will get ready for the memory procedure. He’ll have another discussion with Elizabeth Baldwin (Rebecca Herbst) before he takes this dangerous step.

Liz admitted she’s tried to prepare herself for a terrible outcome. She’s hoping for the best, but she knows the odds aren’t in her favor. Still, Liz can’t help but believe Franco’s going to return. She’ll talk to “Drew” about wanting her husband back, so he’ll do his part to make that happen for her.

Peter August (Wes Ramsey) intends to stop this memory procedure by any means necessary, but GH spoilers tell us that his murder plot will be thwarted within the next couple episodes. In the meantime, General Hospital spoilers say Peter will have to deal with Anna Devane (Finola Hughes). She just approached Peter as he wrapped up his phone call, which included some deadly orders.

Anna will ask what Peter’s up to, so Peter will wonder what makes her think he’s up to something. GH spoilers say Anna will feel like it’s written all over Peter’s face. She’ll suggest that although she didn’t watch Peter grow up, she does feel connected to him. Anna will think she’s beginning to see when Peter has something on his mind. She may not be too pushy about it, but she’ll want Peter to know she’s there for him.

Peter will come up with a lie that may satisfy Anna for now, but she’ll remain uneasy about the secrets he might be keeping. General Hospital spoilers say the excitement’s about to rev up, so don’t miss all the action. We’ll give you updates as other GH news comes in. Stick with the ABC soap and don’t forget to check CDL often for the latest General Hospital spoilers, updates and news.