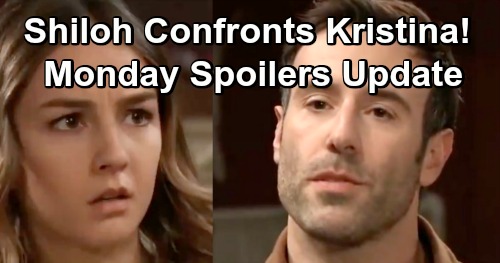 General Hospital (GH) spoilers update for Monday, January 28, tease that Damian Spinelli (Bradford Anderson) will explain what he’s learned to Sam McCall (Kelly Monaco). Jason Morgan (Steve Burton) will also be on hand for this chat. They’ll discuss Shiloh Archer’s (Coby Ryan McLaughlin) deception about something, so Sam will exclaim that she knew it. She could tell Shiloh as lying from the get-go.

Sam will do some plotting and hope it pays off. She’ll be willing to do whatever it takes to get Shiloh out of the picture. That includes cozying up to him and pulling a bit of a con. While Sam determines her next move, Kristina Corinthos-Davis (Lexi Ainsworth) will battle some anxiety. She’ll look flustered when Shiloh brings up some mystery he’s managed to solve.

However, Shiloh probably won’t do anything too menacing and wreck the progress he’s made. In fact, Kristina may be relieved soon. Shiloh might bring up Alexis Davis’ (Nancy Lee Grahn) grilling session. Perhaps the case he’s cracked is where Kristina get her strong spirit from. Kristina is just as feisty as her mom, so Shiloh may compliment them both and contend that it’s good Alexis is so protective.

Kristina may be frustrated with Alexis for pestering Shiloh, but he can just spout off all his typical cult mumbo jumbo. The Dawn of Day community is all about not letting people steal your power. While Shiloh imparts his creepy wisdom, Curtis Ashford (Donnell Turner) will try to ease Jordan Ashford’s (Briana Nicole Henry) mind. She’ll be beating herself up about the investigation at the PCPD.

Curtis will assure Jordan that she’s doing everything she can. He’ll feel confident that they’re going to find some missing puzzle piece and put it all together eventually. Jordan will just hope Lulu Falconeri (Emme Rylan) can recover and give her version of events. She’ll think an eyewitness account is the only way to put an end to this nightmare.

At GH, General Hospital spoilers say Lulu will fear for her life once again. Ryan Chamberlain (Jon Lindstrom) got his eyesight back, so he’s ready to finish what he started. After Laura Webber (Genie Francis) felt some hand squeezes, she rushed off to get a doctor for her daughter. That’s given Ryan this deadly window of opportunity, and he intends to take advantage of it.

Ryan will lean down and encourage Lulu to accept her fate. He won’t see any point in fighting this now. Of course, we know Ryan won’t be able to get the job done. He might hear somebody approaching and bail before he fully snuffs Lulu out. Ryan could abandon his smothering attempt and just hope he left Lulu weak enough to fade away.

There’s a good chance Lulu will indeed slip back into her coma briefly. General Hospital spoilers say Laura will request to be alone on Monday’s new episode. January 28. She’ll need quiet moments of reflection as she awaits better news.

Desperation will strike on Tuesday, but things should be looking up in the near future. Lulu won’t recall the attacks when she ultimately awakens, but her survival will be a big relief to her loved ones.

Meanwhile, Anna Devane (Finola Hughes), Dr. Hamilton Finn (Michael Easton) and Robert Scorpio (Tristan Rogers) will be on the hunt for “Dr. Kevin Collins.” He’ll be missing from his room due to his Lulu mission, but Anna will think he must’ve gone to enjoy the view somewhere. That was Anna’s first move when her sight was restored.

Robert, on the other hand, will think “Kevin” could be off covering his tracks. He believes “Kevin” lied about his connection to Dr. Cabot, who worked for the DVX. In reality, Ryan may not know what his brother was up to. When Ryan finally returns, he’ll be in a tight spot. Anna and the others will confront “Kevin” with the proof, so Ryan will have to think fast.

General Hospital viewers can expect some gripping scenes on Monday. We’ll give you updates as other GH details emerge. Stay tuned to the ABC soap and don’t forget to check CDL often for the latest General Hospital spoilers, updates and news.