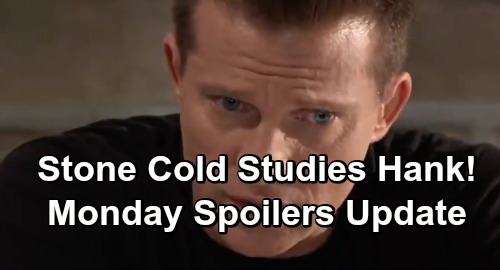 General Hospital (GH) spoilers for Monday, January 7, tease that Drew Cain (Billy Miller) will march over to Charlie’s Pub for a confrontation. He’ll be riled up as he asks Julian Jerome (William deVry) what his problem is. Drew will launch a tirade about how Julian treated Dr. Kim Nero (Tamara Braun) when she was already going through so much. He’ll let Julian know he’s a real SOB for dumping her!

Julian will respond by calling Drew out for kissing Kim on New Year’s Eve. He’ll insist that he’s bowing out, so they should all just move on. At GH, Dr. Terry Randolph (Cassandra James) will approach Kim for a meeting about Oscar Nero (Garren Stitt). Kim will shift all her attention to her son, who’s the most important person in her life. She’ll hope Terry has some good news for her.

In Oscar’s hospital room, Shiloh (Coby Ryan McLaughlin) aka Hank will stop by with Kristina Corinthos-Davis (Lexi Ainsworth). Josslyn Jacks (Eden McCoy) will be introduced to Shiloh, who’ll talk about the community house and what they stand for at DOD. Shiloh will assure Oscar that serving others brings them fulfillment, so he’ll be exactly where he wants to be on this Monday afternoon.

Of course, there’s another reason why Shiloh wants to stay close to Oscar. That’s because Oscar is Drew’s son and there’s a shady connection here. No one knows what secrets might be buried in Hank’s past, but Jason Morgan (Steve Burton) intends find out. He’ll be curious about Shiloh and what he’s up to now, but he’ll think the real answers lie in this man’s time as Hank.

Other General Hospital spoilers say Alexis Davis (Nancy Lee Grahn) will leave Sam McCall (Kelly Monaco) stunned. Sam will barely recognize Alexis after she has an unusual reaction to drama. Since Sam will probably fill her in on her Kristina concerns, Alexis might think they should just let her live her life.

After all, Alexis’ meddling hasn’t done much good so far. Kristina always does what she wants anyway, so Alexis may not see the point in causing trouble. It would just widen the rift unnecessarily. However, Sam will think Shiloh is a creep who’s hiding more than he’s letting on. She won’t want to stop until she knows Kristina’s safe.

Ryan Chamberlain (Jon Lindstrom) will also spook Laura Collins (Genie Francis) at the boxing gym briefly. She’ll quickly settle down when she assumes it’s Dr. Kevin Collins (Jon Lindstrom). Ryan will suggest that he’s been wanting to tell Laura something. He may want to apologize for their relationship drama and everything that’s happened with Ava Jerome (Maura West).

Anything that makes Ryan look like familiar Kevin will work out well for him. The more he puts into this role, the better off he’ll be! General Hospital spoilers say Ryan will still face some extra hurdles soon, so stay tuned. We’ll give you updates as other GH details emerge. Stick with the ABC soap and don’t forget to check CDL often for the latest General Hospital spoilers, updates and news.