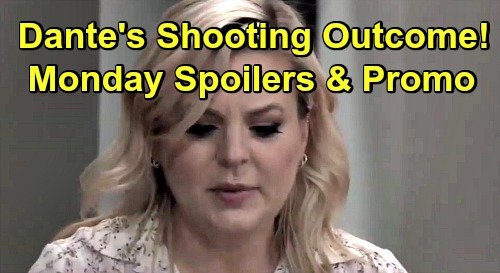 Although Finn has moved on with Anna Devane (Finola Hughes), he still cares deeply for Hayden. Seeing Hayden again has brought up memories the life they were meant to have – including the child they were going to raise. Finn may unpack all that as best as he can and get some advice from Alexis. She’ll probably think Finn should leave the past in the past and find a way forward.

Meanwhile, Laura Webber (Genie Francis) will catch up with Hayden at the Metro Court. Hayden will want updates on Spencer Cassadine (Nicholas Bechtel), so Laura should admit he’s doing well. It looks like she’ll suggest the only cloud that still hangs over Spencer’s head is Valentin Cassadine (James Patrick Stuart). Part of Spencer will never be able to shake wanting to avenge his father’s death.

The loss of Nikolas Cassadine (last played by Nick Stabile) was certainly tough for both Laura and Spencer, but they’ve tried to move on with their lives. Hayden’s trying to do the same, but her story is also quite connected to Valentin. She’s teamed up with Jasper “Jax” Jacks (Ingo Rademacher) to take Valentin down, so they’ll definitely make some sneaky moves in the coming episodes.

However, Ava will stick to the plan and hope Sibley can channel Kiki soon enough. It turns out Ava will also get a warning from Kristina Corinthos-Davis (Lexi Ainsworth). Perhaps Kristina will overhear part of their chat and suggest it’s best to steer clear of all this new age-y stuff. Due to her experience with Shiloh Archer (Coby Ryan McLaughlin), Kristina is likely skeptical of anything and everything right now.

Next, Jason Morgan (Steve Burton) will deliver a warning of his own. He caught Dev Cerci (Ashton Arbab) trying to steal from Laura’s purse, so he trusts the teen even less than before. Jason will contend that if Dev makes trouble for himself, he’ll make trouble for everybody. He’ll fill Carly Corinthos (Laura Wright) in and suggest she needs to be careful when it comes to Dev.

Sonny Corinthos (Maurice Benard) put a lot on the line to help Dev out, so Jason will be keeping an eye on this wildcard kid. Over with Lulu Falconeri (Emme Rylan), she’ll continue her chat with Sonny. Lulu noted that Sonny found Dante Falconeri (Dominic Zamprogna) once and can do it again. On Monday’s episode, General Hospital spoilers say Lulu will insist that it’s time to make this right.

While Lulu hopes to fix her marriage, Maxie Jones (Kirsten Storms) will deal with the damage she’s done. Dante claimed he didn’t care when Maxie showed up with Peter August (Wes Ramsey). He refused to see Maxie, but she tried to barge in anyway. Maxie shouted, “Dante! No!” before a gunshot rang out, but fans were left in the dark on what went down.

It seems obvious that Dante reached for the agent’s gun. Did he shoot the agent or possibly himself? Did the agent beat Dante to his gun and fire instead? Maxie will seem distraught as she says “he’ll be taken to General Hospital,” so that suggests Dante was the one injured. GH is a pretty far drive from this WSB facility, so there’d probably have to be a connection for the patient to be sent there.