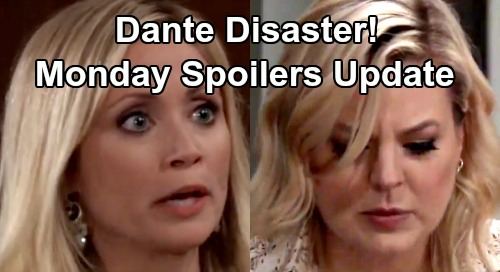 General Hospital (GH) spoilers update for Monday, July 15, tease that Maxie Jones (Kirsten Storms) will be horrified by the scene that’s just unfolded. She refused to take no for an answer after the agent insisted Dante Falconeri (Dominic Zamprogna) didn’t care and wouldn’t see her. Maxie cried out to stop Dante as she opened the door. GH fans heard a gunshot, so we’ll see where that bullet ended up on Monday.

There are a few options to consider here. Dante might’ve snatched the gun and shot the agent, but there’s also a chance he shot himself. Of course, if the the agent was able to think fast enough, he might’ve grabbed his weapon and fired on Dante instead.

Regardless, Maxie will fret about Dante in Monday’s episode. She’ll insist someone’s going to be taken to General Hospital, and Dante’s the only one that makes sense. Maxie pointed out that she had driven a long way to Ithaca with Peter August (Wes Ramsey). She was determined to see Dante at this WSB facility, but things obviously haven’t gone as planned.

Only Dante would have any kind of GH link that’d cause him to be taken there. The question is: What state will Dante be in? Again, the long drive to Ithaca matters. Dante couldn’t survive the trip back to Port Charles if he was severely injured. However, it’s possible he’ll have minor wounds or just a total breakdown. Dante would certainly need to be reevaluated if he just pumped a bullet in an agent.

In the meantime, Lulu Falconeri (Emme Rylan) will beg Sonny Corinthos (Maurice Benard) to find Dante for her. She’ll insist her husband is missing everything and argue that he needs to be in their lives. While Lulu hopes Sonny can make things right, Alexis Davis (Nancy Lee Grahn) will question troubled Hamilton Finn (Michael Easton). She’ll get Finn to open up about Hayden Barnes’ (Rebecca Budig) complicated comeback.

Over with Laura Webber (Genie Francis), she’ll let Hayden know she’s missed seeing her around town. Once Hayden asks about Spencer Cassadine (Nicholas Bechtel), Laura will confess that Valentin Cassadine (James Patrick Stuart) hangs over the kid like a dark cloud. She won’t know if Spencer can ever escape being haunted by Nikolas Cassadine’s (last played by Nick Stabile) death.

Other General Hospital spoilers say Jason Morgan (Steve Burton) will have a bad feeling about Dev Cerci (Ashton Arbab). He caught the would-be stealer going after Laura’s purse, so he’ll fill Carly Corinthos (Laura Wright) in and explain that Dev can’t be trusted. Jason will worry Dev’s going to blow his cover and put them all in extremely hot water.

Across town, Ava Jerome (Maura West) will try to shut down Julian Jerome’s (William deVry) concerns. She may admit she plans to use a psychic to channel Kiki Jerome (Hayley Erin). Julian will remain a worried brother, but Ava will think Sibley Gamble (Veronica Cartright) is her best shot at making contact. She’ll insist she needs this more than anything she’s ever needed in her life.

Kristina Corinthos-Davis (Lexi Ainsworth) will also have some cautionary words on Monday. She may think Ava should ditch the hocus pocus before she gets manipulated. We’ll give you updates as other GH news comes in. Stay tuned to the ABC soap and don’t forget to check CDL often for the latest General Hospital spoilers, updates and news.