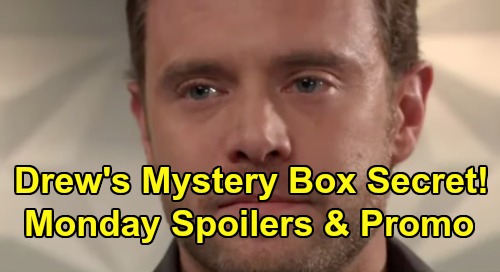 General Hospital (GH) spoilers for Monday, July 29, tease that Franco Baldwin (Roger Howarth) will offer praise to Drew Cain (Billy Miller). He’ll suggest that whatever Drew did, it’s impressive. It’s possible Franco will be chatting with Drew about the bond he formed with Oscar Nero Quartermaine (Garren Stitt) in such a short amount of time. Franco may think it’s inspiring since he wants to bond with Cameron Webber (William Lipton).

Then again, this could tie in with Drew’s past. We know Drew’s set to receive a mysterious package on Monday. Franco might be there when Drew opens it. If the memento inside involves some award honoring Drew, Franco may commend Drew for whatever he did to deserve it. Of course, the real question is: Who sent the package? Drew will mull that over as he tries to make sense of all this.

There’s a chance Shiloh Archer (Coby Ryan McLaughlin) will be behind this box. He might have a sneaky plan in mind as he works to get his hands on the money he wants. Nelle Benson (Chloe Lanier) is certainly worried about Shiloh and the threat he poses to Jonah Corinthos. She’ll plan to tell Michael Corinthos (Chad Duell) something he doesn’t know about their son, but fate will have other ideas.

Technology will somehow become a hurdle to the truth, so we could be looking at a prison power failure or alarm system meltdown. Anything to jolt Nelle back into “keep Jonah away from the Corinthos family at all costs” mode will work. Nelle might realize Shiloh won’t custody of “Wiley” without DNA proof anyway, so there’s really no need for her to blow her plan. She might as well just let this ride and see what happens.

Other General Hospital spoilers say Ava Jerome (Maura West) will get fed up with her new psychic Chelsea Lamb (Jen Ray). Based on Chelsea’s comments so far, she seems to know what she’s talking about. Chelsea’s been relaying images and thoughts that seem quite accurate.

However, GH spoilers state that Ava will grow frustrated due to a psychic speed bump. It looks like Chelsea will get images unrelated to Kiki Jerome (Hayley Erin), so Ava won’t appreciate the distraction. She’ll rant and ask why Chelsea isn’t trying to reach her daughter. Chelsea may reply that she can’t control what she sees and senses, but that won’t stop Ava from being annoyed.

Meanwhile, Carly Corinthos (Laura Wright) and Bobbie Spencer (Jacklyn Zeman) will speak with Brad Cooper (Parry Shen) and Lucas Jones (Ryan Carnes). Carly will contend that “if it makes them happy, then we have to accept it.” It’s possible Carly will be stuck on Michael’s decision to visit Nelle and get some Jonah closure, but her use of the word “them” suggests otherwise. Carly only cares about Michael’s happiness, not Nelle’s.

Perhaps it’ll be something Lucas and Brad spring on them instead. Regardless, Bobbie and Carly will indeed have to accept the situation. Next, Willow Tait (Katelyn MacMullen) will pay Julian Jerome (William deVry) a visit. She’ll reveal that she’s changed her mind and would like to clear the way for Julian to be in “Wiley’s” life. That should please Julian, but he’ll remain uneasy about the swap secret.

Elsewhere, Shiloh’s lawyer will deliver a stern warning. She’ll insist he needs to take the plea bargain he’s being offered or spend the rest of his life in prison. Since Shiloh’s used to wiggling out of trouble, he may roll the dice and count on doing it once again. Shiloh’s far too cocky to accept a deal.

Finally, Sasha Gilmore (Sofia Mattsson) will hear a shocking confession from Michael. It sounds like her new beau will drop lots of Nelle and Jonah bombs on Sasha, so she may feel even worse about her own deception. Sasha’s lying about who she is to Nina Reeves (Cynthia Watros), and Michael will likely make it clear that he hates scheming liars – especially when he’s dating them.