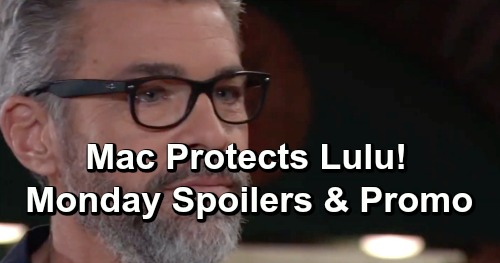 General Hospital (GH) spoilers for Monday, June 17, tease that Curtis Ashford (Donnell Turner) will still have Jordan Ashford’s (Briana Nicole Henry) medical bills on his mind. He tried to lift her spirits about the situation, but he knows they have to find a way to pay for all this. Nina Reeves will think she has the answer as Cynthia Watros debuts in the role.

GH fans can expect an incredible offer on Monday. Nina will insist that Curtis should let her take care of everything. She won’t want Curtis and Jordan worrying about the rising costs, but Curtis will refuse to let Nina pony up that kind of cash. General Hospital spoilers say Curtis will thank Nina for her kindness, but he’ll give her a hard pass.

Nina will fret over Curtis’ stubbornness, but Valentin Cassadine (James Patrick Stuart) will think there’s a way around it. He’ll have a job offer for Curtis later in the week, but that could be awfully risky. Curtis unknowingly convinced Nina that Sasha Gilmore (Sofia Mattsson) is her daughter. If he ever catches on, things won’t turn out well for Valentin.

For now, Valentin will focus on a different problem: Jasper “Jax” Jacks (Ingo Rademacher). Since Jax has already been causing trouble for Nina, Valentin will think there’s an easy solution. He’ll tell Jax that he wants to buy his half of Aurora Media. Valentin can tell there’s a dangerous connection between Jax and Nina, so that’ll also be part of this decision.

Too bad Jax will turn Valentin down flat! Jax has big plans for Crimson and the rest of Aurora’s print division, so Valentin will be out of luck. Meanwhile, Laura Webber (Genie Francis) will need Mac Scorpio’s (John J. York) help. Port Charles could use an interim police commissioner, and Mac is perfect for the job since he’s held it before.

Once Laura offers Mac the temporary gig, he’ll respond with an immediate yes. Mac will do whatever he can to assist Laura and keep the people of PC safe. General Hospital spoilers say Peter August (Wes Ramsey) will also need a favor from Mac. He may want Mac to talk some sense into Maxie Jones (Kirsten Storms), but who’s going to talk some sense into Peter? Mac, that’s who!

Mac will object to Lulu Falconeri’s (Emme Rylan) latest story at The Invader. He’ll question why Peter would let Lulu take on an article this dangerous. Lulu could get mixed up with a criminal through all these dates she’s setting up. Mac will definitely think it’s the wrong call, but Peter may be more concerned about Maxie and this mission to find Dante Falconeri (Dominic Zamprogna).

Maxie will seem a little off when Peter talks to her on Monday. He may worry about how this Dante hunt will affect Maxie as well as their romance. Over with Josslyn Jacks (Eden McCoy), she’ll be determined to contact Oscar Nero Quartermaine (Garren Stitt). Lucy Coe (Lynn Herring) was hesitant to provide her services, but Josslyn’s friends will come through for her soon enough.

Trina Robinson (Sydney Mikayla) will insist they should do it, so she’ll probably be talking about the séance. Cameron Webber (William Lipton) may worry this is a bad idea, but Josslyn won’t be able to let it go. She wants closure, so she’ll move forward with this ill-advised way to make it happen.

Back with Jordan, she’ll wonder how Ryan Chamberlain (Jon Lindstrom) is doing. Jordan will still hate how the kidney drama went down, so she’ll check in with Hamilton Finn (Michael Easton) and try to get some answers on Ryan’s health. As for Kim Nero’s (Tamara Braun) health, she won’t be going the greatest – at least not mentally.

Kim will be fine physically after her brief battle with altitude sickness in Tanzania. However, being back in Port Charles will rev up her grief all over again. The emotional toll will be brutal as Kim admits she doesn’t know who she is anymore. If she’s not Oscar’s mom, Kim just won’t feel like she has an identity.

Julian Jerome (William deVry) will listen to Kim’s concerns and offer reassurance. He’ll undoubtedly remind Kim that she’ll always be Oscar’s mother. Even though Oscar has passed on, their time together mattered and he’ll forever be in Kim’s heart.