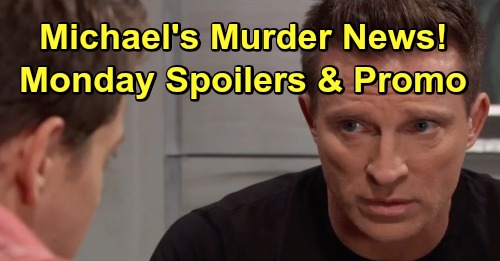 General Hospital (GH) spoilers for Monday, June 24, tease that Josslyn Jacks (Eden McCoy) will spend some time with Jasper “Jax” Jacks (Ingo Rademacher). It looks like they’ll head to Crimson, but Joss won’t be pleased to see someone there. Perhaps Ava Jerome (Maura West) will be on hand to discuss her upcoming issue.

Thanks to Ava’s role in Morgan Corinthos’ (Bryan Craig) death, there’s always going be tension between Ava and Morgan’s family members. Josslyn may let Ava have it, but Ava won’t care as long as her cover girl plans go smoothly. Meanwhile, Maxie Jones (Kirsten Storms) will learn something exciting. She’ll cry out in glee when someone passes along some positive updates.

Maxie recently got a step closer to reuniting Dante Falconeri (Dominic Zamprogna) and Lulu Falconeri (Emme Rylan). It’s possible she’ll learn something else she feels is a step in the right direction. Then again, Maxie’s joyful reaction seems like it’d fit with a lighter topic. It’ll be interesting to find out what’s got Maxie so thrilled.

Over with Curtis Ashford (Donnell Turner), he’ll wonder what Jordan Ashford (Briana Nicole Henry) thinks she’s doing. It looks like Jordan will be overexerting herself in Curtis’ mind. He’ll want Jordan to relax and recover at home, but she may struggle to stay away from police work. Mac Scorpio (John J. York) is the interim commissioner, but that doesn’t mean Jordan can resist advising on a case or two.

Other General Hospital spoilers say Franco Baldwin (Roger Howarth) will express disbelief. He’ll tell Elizabeth Webber (Rebecca Herbst) that he doesn’t think something’s going to happen. This may or may not tie in with their surprise for Willow Tait (Katelyn MacMullen), which is currently derailing her attempt to protect “Wiley Cooper-Jones.”

Franco, Liz and Lulu have something special in mind for Willow’s last day, but she really doesn’t have time for this. She should’ve already been in the courtroom by now. Diane Miller (Carolyn Hennesy) will be in panic mode as she gets on the phone. She’ll tell someone that Willow is late and do her best to track her client down. “Wiley’s” safety and future are at stake!

Back at the elementary school, Willow will insist she really must leave. Nina Reeves (Cynthia Watros) will seem smug as she asks if Willow has somewhere better she needs to be. Of course, everything could be solved if Willow would make it clear that it’s an emergency. She needs to stop with all this “appointment” talk and tell these people to get out of her way.

Next, Brad Cooper’s (Parry Shen) rising stress level will prove too much. He’ll look like he’s in pain at GH, but Carly Corinthos (Laura Wright) is about to make his day even worse. She’ll be stunned when she realizes Brad and Lucas Jones (Ryan Carnes) haven’t told Bobbie Spencer (Jacklyn Zeman) what’s going on. Lucas will wind up spilling the Shiloh situation before the episode concludes.

Finally, General Hospital spoilers say Michael Corinthos (Chad Duell) will bring Jason Morgan (Steve Burton) up to speed on Douglas Miller. He’ll confirm Douglas’ connection to Willow and insist that Shiloh murdered her father. However, Shiloh had some help and that’s the angle to focus on. Jason and Michael will form a plan to track down Shiloh’s minion soon enough.