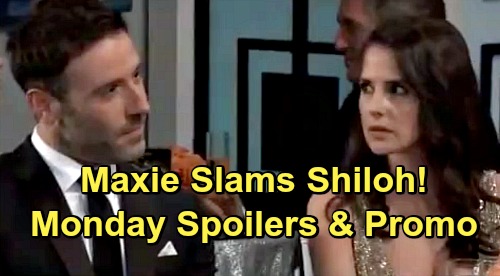 General Hospital (GH) spoilers for Monday, May 20, tease that the Nurses Ball will continue with some great performances. Now that the red-carpet portion of the evening has wrapped up, it’s time to get to the main event. Lucy Coe (Lynn Herring) will host as usual, but you can expect some fun surprises up on stage.

Over with Anna Devane (Finola Hughes), she’ll get annoyed with Robert Scorpio’s (Tristan Rogers) pestering. Anna will insist that she’s Dr. Hamilton Finn’s (Michael Easton) date. She’ll think Robert needs to back off and respect that, but he’ll keep making waves for the duo.

Meanwhile, Scott Baldwin (Kin Shriner) will push Ava Jerome (Maura West) to see the light. He tried to pull off a scheme with Lucy, but it apparently fell flat. Even so, Scott will hope to make the most of it. He’ll try to act like Dr. Kevin Collins (Jon Lindstrom) was sneaking around with Lucy upstairs, but Ava will catch on fast. She’ll understand what Scott’s up to and argue that it isn’t going to work.

Other General Hospital spoilers say Willow Tait (Katelyn MacMullen) will be haunted by the past. She was having a wonderful time with Harrison Chase (Josh Swickard) until Shiloh Archer (Coby Ryan McLaughlin) showed up. Now that Willow knows he’s there, she’ll feel Shiloh watching her every move.

Willow will tell Chase that it’d be the perfect night if it weren’t for Shiloh, but Chase will offer reassurance. He’ll do whatever he can to distract Willow and turn this night around for her. Making Willow part of Chase’s Nurses Ball performance will help, but it’ll also leave Shiloh seething!

Until then, Shiloh will deal with Maxie Jones’ (Kirsten Storms) suspicions and judgment. Maxie was clearly wary of Shiloh when he arrived with Sam McCall (Kelly Monaco) on his arm. She’ll be even more on guard after Peter August (Wes Ramsey) shares some big news. He’ll fill Maxie in on Molly Lansing-Davis’ (Haley Pullos) suggestion, so Maxie will take a jab at Shiloh a little later.

Maxie will suggest that Shiloh is the ideal name for a cult leader. She won’t be shy about her accusations, but Shiloh will play it cool as usual. Across town, Jason Morgan (Steve Burton) and Damian Spinelli (Bradford Anderson) will put their part of the plot in motion. GH spoilers say Jason will mention Sam’s setup. He’ll note that it’s happening tonight, so they have to get moving.

Spinelli and Jason will make sure the DoD house is properly bugged, but there could be a problem. General Hospital spoilers point to a crisis for Sam soon enough. Perhaps Shiloh will have a different location in mind for her initiation. He may even want to turn this into a little getaway with Sam, so Jason and Spinelli will have to think fast.

For now, Jason will get a freaked-out phone call. Sam isn’t in distress just yet, so it’s possible Maxie or Kristina Corinthos-Davis (Lexi Ainsworth) will get in touch instead. Even Carly Corinthos (Laura Wright) could be an option if she senses trouble’s brewing.

It sounds like some exciting moments are coming up. We’ll give you updates as other GH details emerge. Stay tuned to the ABC soap and don’t forget to check CDL often for the latest General Hospital spoilers, updates and news.