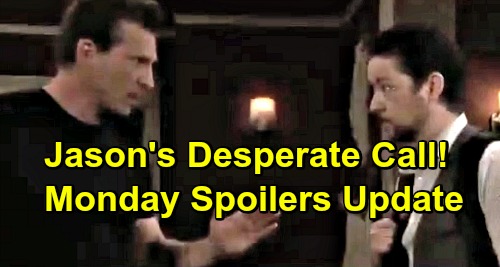 General Hospital (GH) spoilers for Monday, May 20, tease that Jason Morgan (Steve Burton) will be ready to roll. He’ll push Damian Spinelli (Bradford Anderson) to get a move on. They have to get the DoD house bugged before Sam McCall (Kelly Monaco) and Shiloh Archer (Coby Ryan McLaughlin) return.

Jason will insist Sam’s setting Shiloh up tonight, so they need to be prepared. Once everything’s good to go, they’ll give the equipment one last check and get out of there. Of course, there are plenty of ways this plan could go awry.

They’re counting on Shiloh’s lair to be where he finishes the initiation ceremony. However, Shiloh already made it clear that Sam is “special.” He ditched the rules by not having anyone else present last time, so he may do something new this time, too – like taking Sam to a completely different location.

Before all that plays out, there’ll be plenty more Nurses Ball drama. Shiloh will face backlash after Peter August (Wes Ramsey) talks to Maxie Jones (Kirsten Storms). Peter will mention the cult accusations, so Maxie will run with them. She’ll even suggest Shiloh is the perfect name for the leader of a cult (which is true if you ask us).

Shiloh’s presence will also bother Willow Tait (Katelyn MacMullen), who’ll confide in Harrison Chase (Josh Swickard). Willow will feel like Shiloh ruined their fantastic night, but it’s not over yet. Chase will have some surprises in store for Willow and the rest of the crowd. When it’s time for Chase’s performance, he’ll convince Willow to dance with him and infuriate Shiloh in the process.

Other General Hospital spoilers say Robert Scorpio (Tristan Rogers) will get an earful. She’ll pick up on the excessive tension between Robert and Dr. Hamilton Finn (Michael Easton). Anna will finally decide that enough is enough. Finn is her date, so Robert needs to respect that.

Over with Scott Baldwin (Kin Shriner), he’ll fail to save his ruse with Lucy Coe (Lynn Herring). Dr. Kevin Collins (Jon Lindstrom) obviously wasn’t interested in Lucy, who lured him to a room upstairs. Nevertheless, Scott will try to make it seem like the doc was unfaithful. He’ll try every trick in the book to make Ava Jerome (Maura West) believe it, but she’ll only care about her takedown plot.

Ryan Chamberlain (Jon Lindstrom) tried to blow up Laura Webber (Genie Francis) and Curtis Ashford (Donnell Turner), but they thankfully made it out in time. General Hospital spoilers say Jason will get flustered phone call on Monday. Could Laura warn Jason about Ryan’s imminent arrival in PC? It’s possible since GH likes to have Jason involved in pretty much everything.

A call from Kristina Corinthos-Davis (Lexi Ainsworth) is possible, too. It all depends on how things pan out for Sam later. Even Josslyn Jacks (Eden McCoy) could need an emergency ride to the Nurses Ball. She’ll be attending after all, so Jason may have to put the Shiloh scheme on hold briefly.

Elsewhere, General Hospital spoilers say Sonny Corinthos (Maurice Benard) will deal with a dad issue. There’ll be something he has to iron out with Mike Corbin (Max Gail), so this may be about the engagement ring. Let’s hope Finn gets it back and can propose to Anna at last!

It looks like Monday’s episode will be packed with action. We’ll give you updates as other GH news comes in. Stay tuned to the ABC soap and don’t forget to check CDL often for the latest General Hospital spoilers, updates and news.