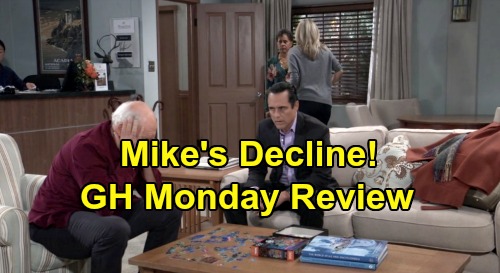 General Hospital (GH) spoilers review for Monday, November 25, reveal that Neil Byrne (Joe Flanigan) learned from a still-hospitalized Alexis Davis (Nancy Lee Grahn) that she had been deliberately targeted with rat poison. He was shocked but stepped out of the room after TJ Ashford (Tajh Bellow) entered to talk with Alexis. TJ nervously asked for Molly Lansing-Davis’ (Halley Pullos) hand in marriage, and Alexis politely shut him down.

Alexis explained that while she loved TJ’s old-school approach, marriage wasn’t about permission or matchmaking, and that he’d have to figure out a way to get Molly to say yes. But Alexis did say that the pair had her blessing if the two of them decide to get married. That made TJ happy, and both he and Alexis felt good about the interaction.

Meanwhile, Neil ran into Julian Jerome (William deVry) as he was heading back to Alexis’ room with coffee. Neil filled Julian in on Alexis ingesting rat poison, and Julian found that intriguing since he had just had a bunch of dead rats in the alley behind Charlie’s Pub. They talked a bit more and Julian happened to mention that Kendra Lennon (Michelle Argyris) had been out dumping garbage in the alley a couple days prior.

Neil started putting it all together and started asking Alexis questions about Kendra, including what they work on together and Alexis rattled off a few things, then mentioned the nutritional supplement that Kendra had provided. Neil noted that Alexis started becoming sick at the same time Kendra gave her the supplement, and Alexis was stunned to realize that Neil suspected Kendra of poisoning her.

Next, Cameron Webber (William Lipton), Josslyn Jacks (Eden McCoy), Dev Cerci (Ashton Arbab), and Trina Robinson (Sydney Mikayla) were stuck in detention for their drinking episode. To pass the time, they decided to each reveal a secret about themselves. Trina started by revealing that she had signed up for a genealogy service a while back and got a direct hit on someone in Port Charles, but that she let the matter drop.

Next, Cameron was supposed to reveal a secret, but he deflected and started picking on Dev, asking him why he was really in Port Charles. Dev then made up some lame story about cheating on tests and getting sent to Port Charles by his father. Well, Cameron and Trina immediately pointed out that Dev’s father was supposed to be dead.

Dev then messed up again and accidentally called Sonny Corinthos (Maurice Benard) his uncle instead of his cousin, which Cameron and Trina also pounced on. Dev looked totally caught in the headlights while Josslyn appeared worried. But the more interesting aspect of this story is Trina’s big reveal – could she be the mystery relative that was a match for Stella Henry (Vernee Watson) a while back?

Finally, Sonny and Carly Corinthos (Laura Wright) visited Mike Corbin (Max Gail) at Turning Woods. Stella was already there when they arrived, and she warned Sonny and Carly that Mike was not having a good day. Mike was withdrawn and appeared to think he was a young child. He didn’t recognize Stella, Sonny, or Carly, and Stella explained that he had recently experienced a significant cognitive decline.

It also appeared that Sonny knew about Mike’s decline but just thought that he had been having a series of bad days. Sonny was clearly in denial about Mike’s condition, but Stella got him to see that he had to face this head-on. Ultimately, Sonny and Carly decided to get through it together, and they ended up enjoying some ice cream with Mike, who still didn’t recognize them.