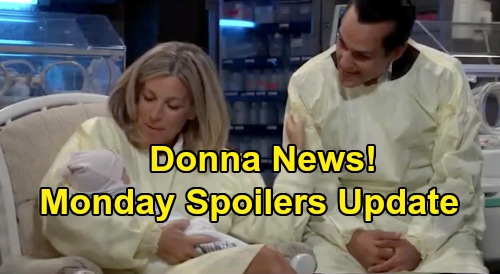 General Hospital (GH) spoilers update for Monday, October 14, teases that Peter August (Wes Ramsey) will have a secret meeting with someone. A mystery lady will show up to take orders from Peter, so he’ll want to make sure she’s clear on the plan. Peter is working hard to frame Sam McCall (Kelly Monaco) for Shiloh Archer’s (Coby Ryan McLaughlin), so this woman may be part of his latest strategy.

At the police station, Jordan Ashford (Briana Nicole Henry) and Harrison Chase (Josh Swickard) will grill Shiloh’s accomplice. The FBI will also get in on this since the case is officially in their jurisdiction. General Hospital spoilers say Bryce Henderson will stand by his claims that Sam hired him. He’ll offer up more details as he works to make this lie believable.

Sam will realize there’s just no end to this nightmare when she’s arrested once more. Fortunately, Jason Morgan (Steve Burton) will have a plan to help. He’ll contact Andre Maddox (Anthony Montgomery) in hopes of proving Peter’s to blame for all this. Jason will take Bryce’s picture along and ask if that’s the same guy who stabbed Andre. He’ll work to put it all together and hand the cops the right culprit.

Other General Hospital spoilers say Donna Corinthos will be doing well at GH. She’ll enjoy a visit with her proud mom and dad in Monday’s episode. Carly Corinthos (Laura Wright) and Sonny Corinthos (Maurice Benard) will marvel over their beautiful bundle of joy and make plenty of promises to her.

Over with Kim Nero (Tamara Braun), she’ll have a run-in with Elizabeth Baldwin (Rebecca Herbst). Kim will try to convince Liz that she should let Franco Baldwin (Roger Howarth) go. She’ll want Liz to consider the idea that the memory reversal isn’t what’s best for Franco.

However, Liz may argue that it’s really none of Kim’s business. Franco is Liz’s husband, so she intends to fight for him with everything she’s got. Liz will think Kim’s the one who needs to let go. Franco isn’t Drew Cain (Billy Miller), but Kim will be unwilling to accept that. The same goes for Franco despite Julian Jerome’s (William deVry) wakeup call.

Julian will leave Franco curious when he stops by for a late visit. General Hospital spoilers say the reason behind this visit will be an interesting one. It looks like Julian will find a way to relate to Franco. Neither one of them is Drew, the man Kim genuinely wants and always has. Franco may think he is, but that’s just not the case. Julian might contend that the sooner Franco comes to grips with that, the better. He’ll probably feel like even more hearts will be broken before all this is over.

At Wyndemere, Liesl Obrecht (Kathleen Gati) will rant about Valentin Cassadine’s (James Patrick Stuart) manipulation. She plans to return to Switzerland while Valentin’s hoping to take off to Greece with Charlotte Cassadine (Scarlett Fernandez). Liesl will talk about how her heart will still be in Port Charles with James West, but Valentin will counter that he’s giving up quite a lot himself.

After they bicker a bit, Liesl will suggest the least Valentin can do is tell her the truth. Did Nina Reeves (Cynthia Watros) actually miscarry or is her biological child still alive? Valentin may not be able to give Liesl the answers she’s seeking. He ignored the real search in favor of cooking up a phony daughter, but he’s regretting that at the moment.

Across town, Nina will bring Maxie Jones (Kirsten Storms) up to speed. Valentin assured Nina he was in the dark, and Sasha Gilmore (Sofia Mattsson) just told her the same thing. Sasha took the blame in hopes of preventing more heartbreak for Nina.

Of course, Nina was incredibly skeptical. This scheme sounds exactly like the kind of thing Valentin would do, so Nina finds it tough to buy that he wasn’t involved. Still, Nina loves Valentin deeply and wants to believe his hands are clean. She’ll share her feelings with Maxie, who’ll wonder if Nina believes Valentin. It seems neither one of them will know who to side with anymore.

General Hospital spoilers say Nina will have to make a firm decision one way or the other. She may ultimately choose to take Valentin at his word, but that’ll just lead to more pain. We’ll give you updates as other GH news comes in. Stick with the ABC soap and don’t forget to check CDL often for the latest General Hospital spoilers, updates and news.