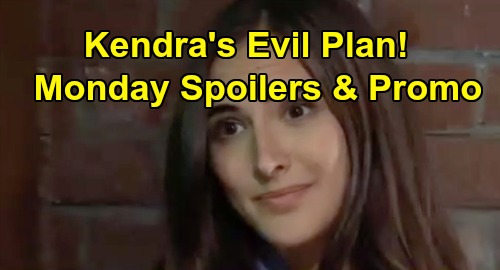 General Hospital (GH) spoilers for Monday, October 28, tease that Michael Corinthos (Chad Duell) will bump into Harrison Chase (Josh Swickard) at the boxing gym, but the mood will be tense. Michael will suggest that Chase should think twice about getting in the ring with him tonight. Chase had no choice but to arrest Sasha Gilmore (Sofia Mattsson), and Michael understands that on some level. Even so, their friendship will be strained as long as Sasha’s facing legal drama.

Across town, Alexis Davis (Nancy Lee Grahn) will meet with Kendra Lennon (Michelle Argyris), who’ll make sure her client’s stocked up with a special batch of supplement. Alexis won’t realize she’s being drugged by Kendra – at least not anytime soon. Instead, it seems Kendra will start to feel more like a friend. She’ll listen as Alexis opens up about not running to someone’s rescue anymore. There’s a good chance she’ll be talking about Kristina Corinthos-Davis (Lexi Ainsworth).

Kristina’s bogus confession set all this in motion, so she’s sure to feel terrible down the road. Elsewhere, Willow Tait (Katelyn MacMullen) will face a tricky situation. It looks like Brad Cooper (Parry Shen) and Lucas Jones (Ryan Carnes) will ask Willow to watch “Wiley Cooper-Jones” (Erik and Theo Olson) while they attend couples’ therapy.

Willow will enjoy a visit with “Wiley,” but Julian Jerome (William deVry) will be unnerved. He’ll ask Willow what she’s doing with his grandson, so she’ll explain and hope that appeases Gramps. However, Julian may feel like Willow’s getting too close for comfort. This isn’t even her biological child, so there are far bigger issues than Willow realizes.

In Dr. Neil Byrne’s (Joe Flanigan) office, he’ll try to get to the heart of Brad and Lucas’ problems. That’ll be tough since Brad will stay tight-lipped about “Wiley.” Lucas, on the other hand, won’t be shy about sharing his concerns. He’ll admit he thinks Brad’s keeping something from him, so Brad will definitely be on the hot seat.

Other General Hospital spoilers say Laura Webber (Genie Francis) will approach Sonny Corinthos (Maurice Benard) with a request. She’ll hope Sonny might be able to find some compassion. It looks like this could have something to do with Franco Baldwin (Roger Howarth) – or “Drew Cain” depending on who you ask! Sonny will end up doing Franco a favor later in the week, so stay tuned.

Until then, General Hospital spoilers say Franco’s fate will be revealed. The judge just came back with her determination on Franco’s competency, so it’s time for everyone to learn what she’s decided. Since Dr. Kevin Collins (Jon Lindstrom) – Scott Baldwin’s (Kin Shriner) own medical expert – argued that Franco meets the legal competency requirements, the judge may have no choice but to find in “Drew’s” favor.

It sounds like an action-packed episode’s on the way. We’ll give you updates as other GH news comes in. Stick with the ABC soap and don’t forget to check CDL often for the latest General Hospital spoilers, updates and news.