General Hospital Spoilers: More GH and Young and the Restless Casting Shockers Ahead – What’s Next for Billy Miller and Drew? 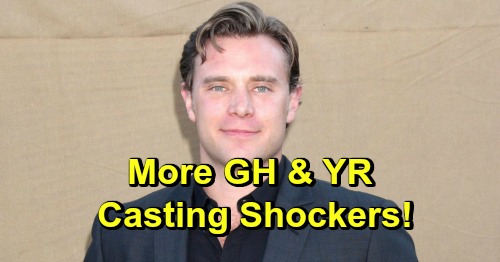 General Hospital (GH) spoilers reveal that another soap’s plans could have a major impact on GH. The Young and the Restless is making big changes for many reasons, but it’s clear that their main goal is to boost ratings. How do they intend to do that? By focusing on soap vets and fan favorites to lure old viewers back home.

You’ve probably heard by now that Gina Tognoni was given the boot as Phyllis Summers. Michelle Stafford is leaving GH to reclaim her old role on Y&R. However, that may not be the only casting news that’s set to make waves. Carolyn Hinsey is a columnist for Soap Opera Digest, and she insists that there are still shifts happening behind the scenes.

After confirming the Phyllis shakeup on Twitter, Hinsey hinted that we’ll see “lots of changes coming to both #YR and #GH.” Does that mean The Young and the Restless will poach another General Hospital star? They recently snagged Brytni Sarpy (ex-Valerie Spencer) for a contract role and now Stafford’s on her way out, too.

It’s possible Y&R will have their eye on another GH star – perhaps one that’s been at Y&R before. Elizabeth Hendrickson (Margaux Dawson) is an option since she used to play Chloe Mitchell on The Young and the Restless, but the real concern here is Billy Miller (Drew Cain). Ever since GH gave the role of Jason Morgan back to Steve Burton, they haven’t given Miller much material to work with.

Drew STILL doesn’t have his memories back, so it’s hard to create a solid character here. We know Drew is a nice guy who loves his kids, but what else do we know? Nothing really and that’s a problem. General Hospital might explore Drew’s old memories after Oscar Nero’s (Garren Stitt) death, but some issues remain.

Drew doesn’t seem to have much chemistry with Dr. Kim Nero (Tamara Braun), so any love story that’s brewing after Oscar’s demise could fall flat. Miller will get some good scenes from the grief aspect, but what happens next? GH has struggled to find a real direction for Drew, so he might be tempted by Y&R if they made him an enticing offer.

If Billy Miller were to jump ship and head back to The Young and the Restless, he’d likely take back the role of Billy Abbott from Jason Thompson. On the bright side, that might leave Thompson available to reprise his role as Dr. Patrick Drake on General Hospital. It’s too early to say if these are the changes SOD’s Hinsey is referring to, but we can’t rule them out after that shocking Stafford soap swap.