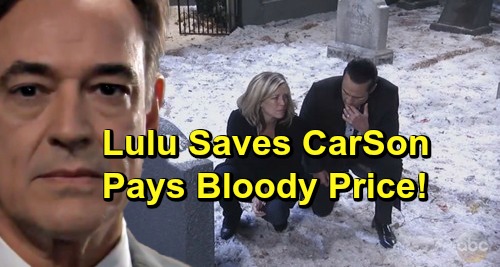 General Hospital (GH) spoilers tease that Ryan Chamberlain’s (Jon Lindstrom) plan is already in motion. After putting Carly Corinthos (Laura Wright) and Sonny Corinthos (Maurice Benard) on his murder to-do list, Ryan resolved to make this happen. He believes this couple’s standing in the way of his future with Ava Jerome (Maura West), so he’s prepared to take deadly action.

Ryan took the next step by contacting Carly and offering a chance to talk. As luck would have it, Carly insisted that Sonny would have to come along. This is a serial killer’s dream! They’re not even making Ryan work hard to pull this off. General Hospital spoilers say Ryan will happily get a trap ready for Sonny and Carly. He’ll insist on meeting at Morgan Corinthos’ (Bryan Craig) grave.

“CarSon” should think that’s strange, but “Dr. Kevin Collins” will surely have a good explanation. He might argue that Morgan will give them comfort or suggest that they still have unresolved issues to deal with.

Now that Mike Corbin (Max Gail) is getting worse, Sonny’s truly facing the idea of losing his father. He already lost his son, so Ryan may contend that Sonny has to confront that, too.

Regardless, GH fans can expect Sonny and Carly to show up there. They’ll be lured to this creepy, quiet location with no one else around. It’ll be the ideal environment for Ryan to do the deed. He’ll be all set to carry out his plot when a phone call forces a change of plans. General Hospital spoilers say this deadly cemetery session will no longer be the priority.

Ryan is ruthless, but there’s a method to his madness. He doesn’t just kill for the fun of it – although he obviously gets a thrill out of each death. Instead, Ryan usually comes up with a reason to commit murder.

To become Ryan’s victim, somebody has to hinder his scheme or pose some sort of threat. The ones who could expose him are the ones who have to be dealt with first.

That’s why Ryan will reluctantly bail on the graveyard gruesomeness. Peter August (Wes Ramsey) shut down Lulu Falconceri’s (Emme Rylan) story on the link between Ryan and the current killer. However, it’s doubtful this nosy reporter will be able to stop digging around. Lulu may hope to write the story anyway and make it so fantastic that Peter can’t pass it up. After all, that was her original plan.

New General Hospital spoilers don’t confirm Lulu as Ryan’s next victim, but they point in that direction. He’ll visit a well-known Port Charles resident who’s quite close to Laura. Ryan will launch a violent attack, but it seems he’s losing his touch. His victim will be left clinging to life, so there’ll be hope this time around.

It sounds like Lulu will tangle with Ryan and live to tell the tale. Of course, she may have a long recovery ahead of her. Will this attack be the one that really trips Ryan up? Will it lead to some connected dots and leave him in panic mode?

We’ll give you updates as other news comes in. Stick with ABC’s GH and don’t forget to check CDL often for the latest General Hospital spoilers, updates and news.