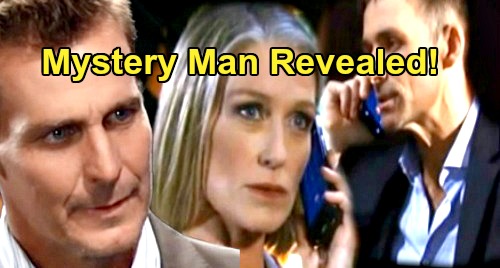 General Hospital (GH) spoilers tease that Cassandra Pierce (Jessica Tuck) has been seen on surveillance with an unknown man and this presents fans with a big question – who could this mysterious man be and what is his connection to her. GH spoilers look to reveal the mystery man with Cassandra below.

Coleman Ratcliffe Would Be A Refreshing Change

General Hospital’s Coleman Ratcliffe (Blake Gibbons) was a fan favorite and always liked bad girls, but then again he liked women in general. Coleman was a sexy bad boy who had chemistry with everyone. Coleman got busted in 2014 and hasn’t been seen since. Could Coleman have attached himself to Cassandra? Could Coleman end up back in jail if it’s him with Cassandra?

Jerry Jacks Is A Safe Bet

Jasper ‘Jax’ Jacks (Ingo Rademacher) is just a little too curious about Cassandra for his brother not to be involved with her. Unless Jax knows about Valentin Cassadine (James Patrick Stuart) and Cassandra’s past connection, Jerry’s involvement would be a conclusion most GH fans would jump to considering Jax’s involvement.

What About Stefan Cassadine?

When Cassandra escaped, she was seen in a limo with a man who was wearing what looked like a Cassadine ring. General Hospital spoilers at that time suggested that Stefan Cassadine (Stephen Nichols) had returned was protecting Cassandra. Stefan could have Cassandra working for him, or she could even be his girlfriend. A Stefan Cassadine return could still be possible with a recast of the character or if portrayer, Stephen Nichols, decided to do double duty with Days of Our Lives .

Stavros Cassadine (Robert Kelker Kelly) could be alive; his body was never identified when Creighton Clark exploded. Stavros is not beyond drug manufacturing to get what he wants. Could he and Cassandra be working together to bring drugs into Port Charles?

And Then There’s Nikolas

Nikolas Cassadine (Tyler Christopher) was supposedly killed by Valentin on Cassadine Island. GH Fans have presumed that Nik has been alive for years due to the many hints on General Hospital. Could Cassandra be helping Nik to get back at Valentin and Nina Reeves (Cynthia Watros) after her overdose?

Nik returning to Port Charles would be a great addition to the storyline considering the mess Valentin has gotten himself into with his lies to Nina. Cassandra and Nik could have teamed up for revenge and are planning a  comeback to take Valentin down once and for all

With all of the people that Cassandra could be with, it will be interest to see who is revealed as her male friend what he wants out of their relationship. Who do you think the mystery man is? Come back to CDL for more General Hospital spoilers and news!