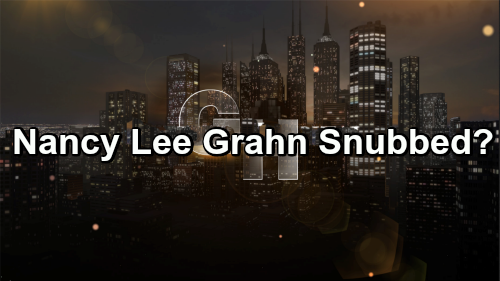 General Hospital (GH) spoilers reveal that several great ABC soap stars have something to celebrate. Some fine actors and actresses scored pre-nominations for the Daytime Emmys this year. Unfortunately, one typical nominee was left off the pre-nom list and it had GH fans crying foul for a while.

Nancy Lee Grahn is known for her excellent work as Alexis Davis on General Hospital. She’s a powerhouse actress who can really deliver when she’s given the proper material. Of course, it’s the proper material part that presented a problem in 2018. Grahn didn’t really have a story of her own, so picking something to submit would’ve been a real challenge.

That’s why Grahn chose to opt out this year and just let her costars vie for the statuette. Grahn certainly had some good moments in the “Me Too” storyline when she stepped up as Kiki Jerome’s (Hayley Erin) lawyer. However, that storyline wasn’t about Alexis. It wasn’t designed for her to shine, so Grahn just decided skipping her submission would be for the best.

Nevertheless, some General Hospital viewers were upset before they found out the news. They sent plenty of tweets in support of Grahn, so she eventually set the record straight regarding the snub. “I did not submit this year,” Grahn said. “Sitting this one out and watching #DaytimeEmmys in my Pj’s drinking a martini along with all of you. Love & congrats to all in the game.”

Once Grahn cleared things up, her fans chimed in again with new complaints. Everyone’s hoping Alexis will have a shot at a Daytime Emmy by the time next year’s ceremony rolls around. If that’s going to happen, Grahn needs better material.

One GH watcher said, “Happy to see you wishing your colleagues the best. That said you were woefully underused this past year and I sincerely hope that changes in 2019.” Another viewer said, “Personally, I hope they write a front burner story for Alexis, preferably one that you can sink your teeth into.” Let’s hope the show delivers some solid material for Alexis in the coming months!

General Hospital spoilers hint that Alexis will be wrapped up in Kristina Corinthos-Davis’ (Lexi Ainsworth) drama for a while. She’ll also have to decide whether she’s through with Julian Jerome (William deVry). Alexis needs to make a decision once and for all!

What do you think about Nancy Lee Grahn’s decision to skip submitting this year? Are you hoping General Hospital gives her more to work with in 2019? We’ll give you updates as other GH details emerge. Stay tuned to the ABC soap and don’t forget to check CDL often for the latest General Hospital spoilers, updates and news.

I did not submit this year. Sitting this one out and watching #DaytimeEmmys in my Pj’s drinking a martini along with all of you. Love & congrats to all in the game. 🍸🏆😘 #gh @BoldAndBeauti10 @YandR_CBS @nbcdays @GeneralHospital https://t.co/nWn7BxQTKk