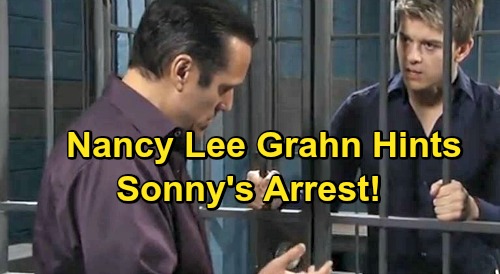 General Hospital (GH) spoilers tease that Nancy Lee Grahn’s tweet could offer a huge hint about what’s ahead. She recently posted a pic of herself along with Maurice Benard, but the caption was the truly intriguing part. Grahn said, “@MauriceBenard and me after having our yodeling duet of ‘I Got You (outta jail) Babe’ cut from the #GH #nursesball this year.”

Grahn was obviously joking about the yodeling, but what about the whole getting Sonny out of jail thing? That seems awfully specific, so maybe that’s a big clue about where things are headed next. Will Sonny get arrested thanks to all the kidnapping drama? Will Alexis provide him with an alibi?

Shiloh could have Jason arrested for trespassing and may press Kristina to charge him with kidnapping. This cult leader would naturally push for Sonny to be charged as an accessory. Kristina is Sonny’s daughter after all, and Sonny wanted her away from Shiloh.

However, Sonny was with Alexis when Jason grabbed Kristina. Alexis would have no choice but to be Sonny’s alibi because they were busy discussing all Kristina’s drama. If Diane Miller (Carolyn Hennesy) is unavailable, Alexis could even be the attorney who gets Sonny out of jail.

Kristina was embraced by Shiloh and his DOD followers, so she was eager to go through with this initiation ceremony. She may not believe Shiloh would have sex with her in a drugged state without her consent. Even if she buys that, she’ll probably convince herself it’d be an honor – just like Willow Tait (Katelyn MacMullen) did once upon a time.

Unless Sonny manages to lock Kristina up somewhere or ship her off the island, Kristina will rebel and do anything she can to get back to Shiloh. General Hospital spoilers say Dr. Neil Byrne (Joe Flanigan) will try exit therapy, but you can bet Kristina will give him some trouble. Will Kristina accept the truth before it’s too late?

General Hospital fans will be anxious to see the twists the rest of this story brings. We’ll give you updates as other GH news comes in. Stay tuned to the ABC soap and don’t forget to check CDL often for the latest General Hospital spoilers, updates and news.

. ⁦@MauriceBenard⁩ and me after having our yodeling duet of “I Got You (outta jail) Babe” cut from the #GH #nursesball this year. pic.twitter.com/n1MZZzxBx6