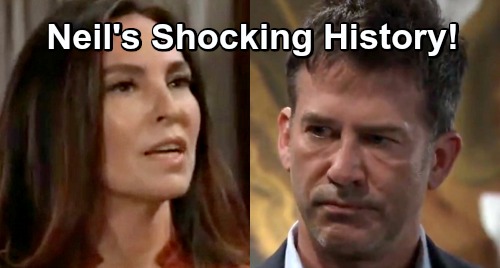 General Hospital (GH) spoilers tease that Dr. Neil Bryne (Joe Flanigan) is still keeping a few secrets. GH fans are wondering why Neil is so versed in dealing with cults. Since cult extraction isn’t all that common in psychiatric practices, why is Neil such a specialist?

Neil has mentioned that one of his exit strategy cases didn’t end well. That seemingly means the patient died or ultimately went back to the cult and faced a troubling outcome. Did Neil have a patient that committed suicide or does this situation hit much closer to home?

Let’s consider the possibility that Neil is Willow Tait’s (Katelyn MacMullen) adoptive father. After all, Willow’s dad is still an unknown while her adoptive mother is becoming clearer. General Hospital spoilers hint that Harmony Miller (Inga Cadranel) is likely the mom that raised Willow aka Kali Miller. The fact that they have the same last name appears to give it away.

How might Neil fit into all this? Could he be Harmony’s former partner or even ex-wife? General Hospital viewers know Harmony became deeply involved in Dawn of Day, so maybe Neil gained his experience through trying to get her out. Neil naturally would’ve wanted to break Willow free from the nightmare, too.

Willow told Michael Corinthos (Chad Duell) that her mother, who was part of “The Trust,” also pushed her to join. What if Harmony’s pledge offering was that Willow is not her biological child? Harmony’s big secret could be that Madeline Reeves (Donna Mills) paid Neil to take the baby and keep quiet. Neil could’ve been Nina’s former psychiatrist, which would’ve put him in the prime position for this story.

Granted, Neil’s last name isn’t Miller, but that doesn’t mean he always went by “Byrne.” He might’ve changed his name because of information given to DoD and Shiloh Archer (Coby Ryan McLaughlin) by Harmony. Maybe Neil tried to get Willow out and was blackmailed by the creepy cult leader. Neil may have focused on cult extraction because he couldn’t save the child he thought of as his own.

Could Harmony have blackmailed Willow into joining DoD? What if Harmony forced Willow to sleep with Shiloh by using Neil’s secret? Willow noted that her mom made her think sex with Shiloh was an honor, but she still may have needed an extra push.

Harmony seems like someone who has a real dark side. If she left “The Trust” at some point – perhaps because Neil kidnapped her – the only way back in Shiloh’s good graces might’ve been a virgin sacrifice. Harmony might’ve encouraged Shiloh to make Willow a new member and take her up to his lair.

Willow hates Shiloh so much that she’s afraid she might kill him, so there may be more secrets to uncover. Do you think Neil could be Harmony’s ex and Willow’s adoptive father? We’ll give you updates as other GH news comes in. Stay tuned to the ABC soap and don’t forget to check CDL often for the latest General Hospital spoilers, updates and news.