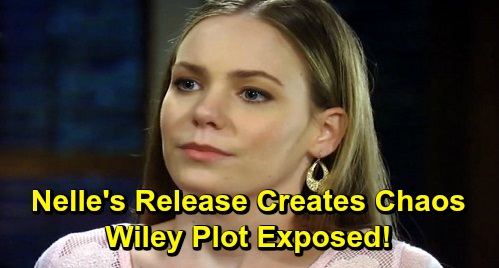 General Hospital (GH) spoilers tease that Nelle Benson (Chloe Lanier) will count on her attorney to work his magic. Martin Gray (Michael E. Knight) warned Nelle that she wouldn’t be getting another parole hearing anytime soon. He tried to drive that point home, but Nelle wasn’t having it. She filled Martin in on her marriage and the money they both stand to gain if he pulls this off.

Of course, based on all the clues here, Nelle obviously married Shiloh Archer (Coby Ryan McLaughlin) and intends to get her hands on ELQ shares. Nelle just needs Martin to do the impossible and get her off the hook for crimes she confessed to. Martin later called Valentin Cassadine (James Patrick Stuart) and alluded to a project they’d discussed before. He hinted that a new avenue just opened up, so Martin clearly stands a lot to gain through Nelle’s case.

Valentin has friends in high places, and Martin is a real shark when it comes to fighting for his clients. Nelle could easily walk out of prison a free woman sooner or later. If that happens, you can bet chaos will be unleashed in Port Charles. For starters, the Corinthos clan will be furious. Michael Corinthos (Chad Duell) obviously wouldn’t like Nelle’s freedom one bit, and neither would Sonny Corinthos (Maurice Benard).

GH fans would also see outrage from Josslyn Jacks (Eden McCoy) and others Nelle wronged during her previous reign of terror. However, it’s Carly Corinthos (Laura Wright) who might be the angriest! Her Mama bear side would inevitably come out. Carly would want to protect Michael and give Nelle a piece of her mind over old wounds. There’s certainly plenty of bad blood between Carly and Nelle, so General Hospital could get some serious drama out of this.

Naturally, Nelle’s freedom could be Brad Cooper’s (Parry Shen) biggest mess yet. Before Nelle’s parole hearing, Brad nervously asked what Nelle planned to do about “Wiley Cooper-Jones” (Erik and Theo Olson). Nelle just said “Wiley” would be fine and immediately called for the guard. She may have a chance to do whatever she had in mind thanks to Martin!