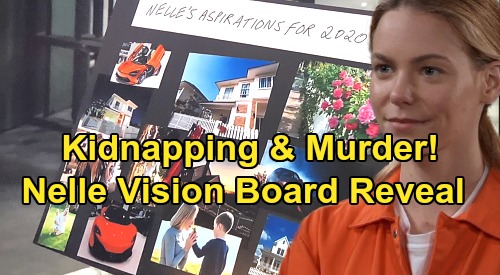 General Hospital (GH) spoilers tease that Nelle Benson’s (Chloe Benson) got some serious goals. At Pentonville, Nelle pulled out a vision board – which was both hilarious and quite revealing. She gleefully looked at this poster labeled: “NELLE’S ASPIRATIONS FOR 2020.”

Nelle’s apparently been pretty busy during arts and crafts time. She found herself several pictures to paste and made a collage of all the things she’s working toward. Let’s examine that twisted mind of Nelle’s and try to figure out exactly what she expects when she’s released.

As you might expect, “Wiley Cooper-Jones” aka Jonah Corinthos (Erik and Theo Olson) was a huge part of this vision board. Nelle obviously didn’t have pics of “Wiley” to paste, but she made sure to include some of a doting mother and her young son. There was even one of a small boy in a flashy suit and sunglasses, so Nelle clearly wants to make Jonah her little pet to dress up and parade around.

This marks a shift from Nelle’s original view of Jonah. She initially looked at the kid as a weapon to be used against Michael Corinthos (Chad Duell) and the Corinthos clan. Nelle undoubtedly still hopes that’ll be the case, but she clearly wants to be a mom now, too. She intends to raise her son when she gets out, not sit on the sidelines and let Brad Cooper (Parry Shen) do it for her. 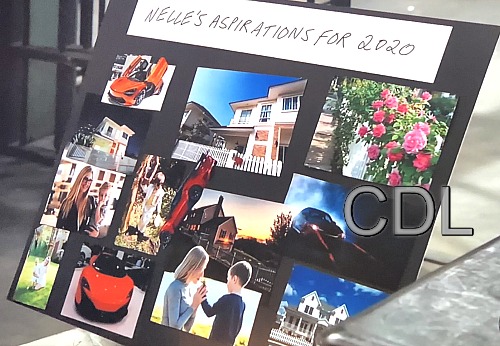 That’s another important point. Nelle’s vision didn’t include a man or any kind of dad in the picture. Although Nelle has acted a bit jealous over Sasha Gilmore (Sofia Mattsson), that’s been more about “Wiley” than anything. She doesn’t want Sasha too close to her son – and now that Nelle’s seen “Wiley” with Willow Tait (Katelyn MacMullen), she may feel the same way about her, too.

Basically, Nelle doesn’t care whether Michael loves her or not. This is all about Jonah and revenge now. That brings us to some other intriguing photos. Nelle pasted pics of several houses that she liked along with some flowers growing alongside a white picket fence. Her endgame is having a happy, peaceful home with Jonah, but how’s Nelle going to pull that off?

General Hospital spoilers say Nelle has a risky plan, which will light the fuse that sets off the Jonah reveal explosion. There’s no word yet on exactly what Nelle will do, but it seems to be more than just kidnapping the kid. Nelle’s probably more strategic than that. Based on this dream board, she seemingly wants to live a quiet life of freedom without the threat of prison hanging over her.

There were also some pics of Nelle’s dream car, which is apparently a red Lamborghini or some other crazy expensive car with scissor doors. Nelle’s apparently counting on those ELQ shares to make her filthy rich! However, perhaps the most interesting part of this aspirations board was a different car in a rather ominous photo.

Nelle had three pictures of her fancy red vehicle and another of a somewhat plain one. Plus, that plain-looking car was barely visible in the photo. There were spooky, dark clouds in the background, and the car had headlights on. It was the one pic that almost seemed out of place in a sea of Nelle’s Instagram-worthy dreams. This might be a huge clue about where Nelle’s scheme is going.

It’s possible Nelle intends to kidnap Jonah after all – and she’s thinking she’ll do it in a plain Jane car under cover of night. However, General Hospital spoilers don’t really point to that right now. This could be an indicator that Nelle actually intends to do something more sinister. Could she hope to run over Michael and finish the murder plot she once wanted to carry out? What about Nelle’s worst enemy, Carly Corinthos (Laura Wright)?

That seems awfully similar to what Kendra Lennon (Michelle Argyris) tried to do to Alexis Davis (Nancy Lee Grahn), so General Hospital may or may not be that repetitive. Nevertheless, GH fans can definitely expect Nelle to have vengeance on her mind. There’s also a chance she’s got some sort of plan to off Brad Cooper (Parry Shen) and try to get legal custody. Remember that Nelle’s a psycho who thinks anything is possible!

Whatever the case, General Hospital spoilers say Nelle will cause chaos once she’s finally a free woman. What did you think of Nelle’s vision board? Do you think that ominous car photo will be significant? We’ll give you updates as other GH news comes in. Stay tuned to the ABC soap and don’t forget to check CDL often for the latest General Hospital spoilers, updates and news.