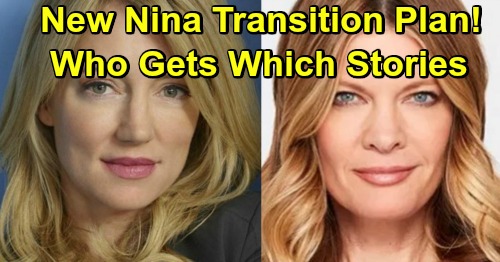 General Hospital (GH) spoilers tease that Nina Reeves (Michelle Stafford) has some serious shockers headed her way. Valentin Cassadine (James Patrick Stuart) has had several close calls, but he’s managed to scheme or sweet-talk his way out of all of them. He’s determined to keep the truth about Sasha Gilmore (Sofia Mattsson) under wraps, so he’ll keep lying and hope for the best.

Nina wants to believe Valentin has turned over a new leaf, so she’s choosing to trust him right now. Of course, the proof is seemingly on Valentin’s side. Three DNA tests have confirmed Sasha as a match for Nina, so that’s undoubtedly fueling her misplaced trust. Unfortunately, that’ll only make it more devastating when the big reveal happens.

General Hospital spoilers say Nina will likely face this crushing blow during May sweeps. It makes sense for GH to go ahead and drop the bomb before Stafford wraps up her contract next month. We’ve watched Stafford’s Nina form a bond with Sasha, so it’s important for her to react here.

GH fans also deserve to see this version of “Valentina” blow up. Stafford’s Nina and Valentin have been through a lot together, so it’ll mean more if their relationship officially implodes before the recast. Viewers will need time to get used to Cynthia Watros’ version after she takes over the part.

However, General Hospital spoilers say the real daughter revelation may be a bit trickier. It would be a waste for Nina to find out about her true child right after this devastation. We need to see her suffer through the loss so she can be overjoyed when the truth comes out. As a result, there may not be enough time for Stafford’s Nina to get updates on that bombshell.

Watros starts filming in early June, so that doesn’t leave a lot of scenes for Stafford’s Nina to find out the whole story. Willow Tait (Katelyn MacMullen) appears to be Nina’s biological daughter, but will Watros’ Nina figure that out? It’d be wise to put her version of Nina in with Willow and keep revving up that tension. We could adjust to the recast while we wait on this final daughter drama to erupt.

Even if Stafford is able to do that part of the storyline as well, it’s good that GH is recasting. Willow and Watros’ Nina should be able to bond – at least for a while. There’s no guarantee General Hospital will keep Watros long-term, but they might if fans grow to like her.

Regardless, they’ve spent months setting up this story, so they need to finish strong. They can’t cheat Willow and Nina out of what they’ve building to. General Hospital spoilers say even Valentin will be stunned by some of the twists and turns ahead! We’ll keep you posted as other GH news comes in. Stick with the ABC soap and don’t forget to check CDL often for the latest General Hospital spoilers, updates and news.