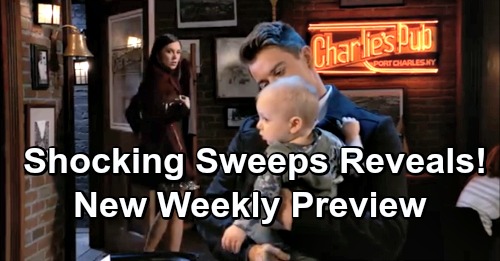 Oscar Nero and Josslyn Jacks (Garren Stitt, Eden McCoy) get lost in the catacombs and Oscar passes out while their mothers Kim Nero (Tamara Braun) and Carly Corinthos (Laura Wright) worry about them. Jason Morgan (Steve Burton) and Sam McCall (Kelly Monaco) come to the rescue, but then Jason falls backwards on a tall ladder deep in the catacombs!

Maxie Jones (Kirsten Storms) confides her concerns about the timing of moving on from her late husband Nathan West (Ryan Paevey) to Peter August (Wes Ramsey), and he tells her “whenever Nathan tells you it’s okay to let him go” and she goes to Nathan’s grave. Then we see Maxie and Peter embrace.

Lucy Coe (Lynn Herring) may face a bumpy ride as well, after telling Ava Jerome (Maura West) some very unflattering things about herself. Michael Corinthos (Chad Duell) visits Lucas Jones (Ryan Carnes) and baby Wiley/Jonah (twins Eric and Theodore), while Lucas tells him Wiley has brought him so much joy he hates to think what would happen if he would have to let him go.

Things heat up between Willow Tait (Katelyn MacMullen) and Harrison Chase (Josh Swickard) and she comes clean to him about something she’s been dodging the truth about – she also comes clean to Michael Corinthos. Curtis Ashford (Donnell Turner) talks to Marcus Godfrey (Nigel Gibbs) about Stella (Vernee Watson).

Robert Scorpio (Tristan Rogers) returns to help with the mystery of why and how Anna Devane (Finola Hughes) contracted a rare virus that caused her to become temporarily blind – and last but not least, Jason and Sam finally do the deed! Stay tuned to GH and keep checking CDL General Hospital spoilers and news frequently to see what happens as we head into February sweeps!