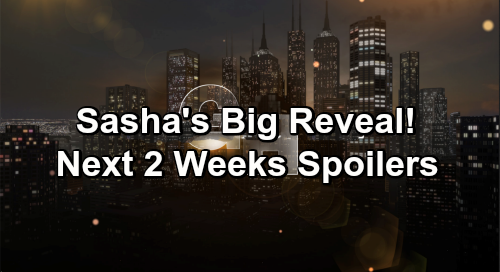 General Hospital (GH) spoilers for the next two weeks tease that the serial killer turmoil will continue in Port Charles. During the week of January 28-February 1, Lulu Falconeri (Emme Rylan) will face another cruel attack on her life. Ryan Chamberlain (Jon Lindstrom) may force a setback by attempting to suffocate Lulu, but she’ll manage to survive.

That’ll leave Ryan enraged, but he’ll at least be glad when Lulu wakes up again and can’t remember anything . General Hospital spoilers say Jordan Ashford (Briana Nicole Henry) will turn to “Dr. Kevin Collins” for help. Perhaps she’ll wonder if “Kevin” can hypnotize Lulu or use some other therapy tactic to bring back Lulu’s memories.

Ryan can’t do and he wouldn’t even if he could! He has to keep his murderous side under wraps. Over with Michael Corinthos (Chad Duell), he’ll have a bonding day with “Wiley” Cooper-Jones. Michael will happily take “Wiley” over to Charlie’s. Willow Tait (Katelyn MacMullen) always seems to be there, so we can’t rule out another run-in.

Other GH spoilers say Elizabeth Webber (Rebecca Herbst) will seek Brad Cooper’s (Parry Shen) advice. She’ll reveal that Aiden Webber (Jason David) might be gay and ask what his experience was like. The bullying is the most pressing issue, so Brad may chime in on that. There might be certain things that helped him when he was younger.

Next, Alexis Davis (Nancy Lee Grahn) will spend time with Kristina Corinthos-Davis (Lexi Ainsworth). It looks like they’ll attend a Dawn of Day seminar together, so that’s sure to be interesting! Shiloh Archer (Coby Ryan McLaughlin) will deliver his eerie guidance as usual, but Alexis may actually learn something beneficial.

During the week of February 4-8, Franco Baldwin (Roger Howarth) will walk into a trap. He’ll put his trust in “Kevin,” which is obviously a huge mistake. General Hospital spoilers state that Franco will become a pawn in Ryan’s dangerous game. He’ll try to frame Franco for all this violence soon, so stay tuned.

Over with Liesl Obrecht (Kathleen Gati), she’ll ponder Maxie West’s (Kristen Storms) power. Liesl will sense that Peter August (Wes Ramsey) is smitten and will do pretty much anything Maxie asks. GH fans know Peter let Liesl off the hook for Maxie’s sake. It sounds like Dr. O will hope to exploit the Paxie bond even more.

However, Peter will actually pull away a bit later. It seems Maxie won’t understand why he’s hesitating on their romance. Peter may feel guilty about his past as well as everything that happened to Nathan West (Ryan Paevey). He probably just has some things left to work through, so Maxie should be able to help with that.

Finally, Sasha Gilmore (Sofia Mattsson) will roll back into town with a surprise in mind. She’ll influence Nina Cassadine’s (Michelle Stafford) relationship in more ways than one, so Valentin Cassadine (James Patrick Stuart) had better watch out! That fake daughter shocker has to explode sooner or later.