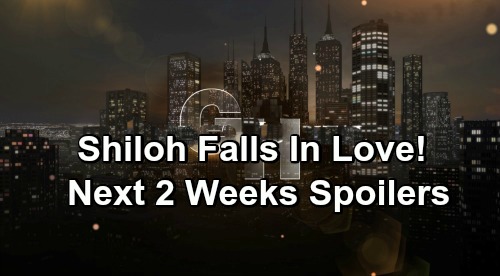 General Hospital (GH) spoilers for the next two weeks tease that some surprises are looming in Port Charles. During the week of April 29-May 3, Ava Jerome (Maura West) will get a phone call that leaves her on edge. It’ll happen after Ryan Chamberlain’s (Jon Lindstrom) memorial service and hand burial, so there may be a connection.

GH spoilers say there’ll be a tearful episode devoted to Oscar and his loved ones on May 1. It’ll be a time for reflection, goodbyes and attempts at acceptance. Meanwhile, Carly Corinthos (Laura Wright) will have some kind words for Elizabeth Baldwin (Rebecca Herbst). She’ll most likely suggest that Cameron Webber (William Lipton) is a sweet kid and has been a huge help during Joss’ crisis.

During the week of May 6-10, Laura Webber (Genie Francis) will catch up with Robert Scorpio (Tristan Rogers). It turns out they’ll team up soon in hopes of tracking down Ryan. Curtis Ashford (Donnell Turner) will also have some news regarding the Ryan search, so the suspense is building in this shocking storyline.

Next, Peter August (Wes Ramsey) will push past his fear of love. He’s not sure he really knows how to give it properly, but he at least has to try. Peter cares a great deal for Maxie Jones (Kirsten Storms), so he’ll give her the rest of his heart and make this the kind of romance that lasts.

Other General Hospital spoilers say Jasper “Jax” Jacks (Ingo Rademacher) will make his way back to Port Charles. He’ll catch a few PC residents off guard, but his priority will be comforting Josslyn. Fortunately, Joss’ grief won’t be the only reason for Jax to stay in town. He’ll find another before long, which means Jax is sticking around indefinitely.

Over with Shiloh Archer (Coby Ryan McLaughlin), he’ll battle a major distraction. Will it be his growing feelings for Sam McCall (Kelly Monaco)? Regardless, this could lead to a few hiccups for Shiloh. Meanwhile, Lucas Jones (Ryan Carnes) will seek Julian Jerome’s (William deVry) guidance. He may talk about Brad Cooper’s (Parry Shen) interest in DoD and wonder if it’s really healthy.

General Hospital spoilers say Mike Corbin (Max Gail) will pop up again. He’ll enjoy a bonding session with Sonny Corinthos (Maurice Benard), so it sounds like some warm moments are coming up. We’ll give you updates as other GH details emerge. Stay tuned to the ABC soap and don’t forget to check CDL often for the latest General Hospital spoilers, updates and news.