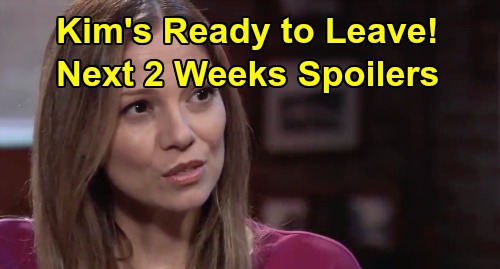 General Hospital (GH) spoilers for the next two weeks tease that more struggles are ahead in Port Charles. During the week of November 4-8, Kim Nero (Tamara Braun) will be looking for some closure. After her last conversation with “Drew Cain” aka Franco Baldwin (Roger Howarth), Kim clearly doesn’t have much hope for their future. “Drew” suggested he still wanted to be with Kim, but she feels like he won’t do it until she’s “fixed” – and that may not even be possible.

Kim will likely turn to “Drew” in the week ahead and hope to end things on a better note. She’s not happy about putting this chapter behind her, but she may start to see that it’s necessary. As for “Drew,” he’ll realize something startling later. Will he discover that Cameron Webber (Jon Lindstrom) was drinking? That could certainly intensify “Drew’s” guilt over abandoning the “Friz” family.

Liz will get some awful news later, which could tie in with Cam’s consequences. It’ll be interesting to see how things play out for Cameron in the coming episodes. Over with Cassandra Pierce (Jessica Tuck), she’ll deliver a fierce threat and experience total terror the next day. Sam McCall (Kelly Monaco) clearly doesn’t scare Sam, but Ryan Chamberlain (Jon Lindstrom) might!

There’s been some GH buzz about Ryan potentially attacking a female inmate. There’s no confirmation on that yet, but it’s possible Cassandra will provoke Ryan’s wrath. Meanwhile, Alexis Davis’ (Nancy Lee Grahn) condition will rapidly deteriorate – in fact it appears she will die unless her medical problem is understood and solved. Jason Morgan (Steve Burton) will get a troubling phone call, which could be related to Alexis’ health crisis. That’s something Sam should definitely get updates on.

Julian Jerome (William deVry) will head to GH eventually, so he may pop in and check on Alexis. These two will always be connected. In fact, General Hospital spoilers say this whole ordeal could bring Julian and Alexis closer. Since Julian has met Kendra Lennon (Michelle Argyris), he’s involved in this story now and could expose the deadly threat at some point.

Julian will also give Brad Cooper (Parry Shen) an ultimatum, which will involve divorcing Lucas Jones (Ryan Carnes) and leaving town or else! However, Brad will fight back in a big way. He’ll put a lot on the line, but he’ll have no choice if he wants to save his relationship with Lucas.

During the week of November 11-15, Carly Corinthos (Laura Wright) will reach an agreement with Jasper “Jax” Jacks (Ingo Rademacher). Their deal will involve keeping a secret from Sonny Corinthos (Maurice Benard) – most likely about Nikolas Cassadine’s (Marcus Coloma) survival. Since Ava Jerome (Maura West) committed herself, there’ll be some Avery Corinthos (Ava and Grace Scarola) issues that need to be addressed.

Since Ava was telling the truth, she should lose her spot in Ava’s life over this. Jax will likely make sure of that with a little nudging from Laura Webber (Genie Francis), who may be brought in the loop soon. It looks like Ava herself will gain some clarity eventually, so she should be relieved to know she’s not insane! Going along with this plan could prove difficult, but all the key players will do whatever they have to do.

Other General Hospital spoilers say Harrison Chase (Josh Swickard) will give Robert Scorpio (Tristan Rogers) a warning. He may sense that Robert wants to swoop in and steal Anna Devane (Finola Hughes) away from Hamilton Finn (Michael Easton). Chase is a great little bro, so he might tell Robert to back off and let Finn deal with his daughter drama. He’ll want to protect Finn’s happiness, but Finn himself will admit he’s got a lot to work through with Anna.

The same goes for Finn and Hayden Barnes (Rebecca Budig), who will also get down to the nitty-gritty. They’ll discuss Violet Finn (Jophielle Love) and try to hash things out as best as they can. General Hospital spoilers say the next two weeks will be packed with action, so stay tuned. We’ll keep you posted as other GH details emerge. Stick with the ABC soap and don’t forget to check CDL often for the latest General Hospital spoilers, updates and news.