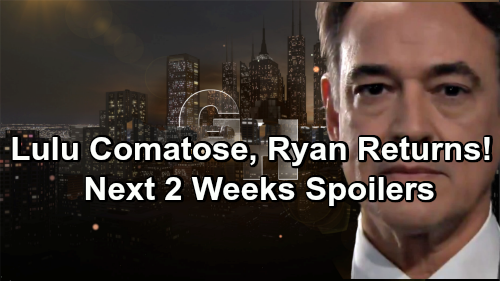 General Hospital (GH) spoilers for the next two weeks tease that several characters will have serious concerns. During the week of January 21-25, Sam McCall (Kelly Monaco) will meet with Alexis Davis (Nancy Lee Grahn) to fill her in on the Dawn of Day seminar. She didn’t like what she saw, so she’ll want to give Alexis updates.

Kristina Corinthos-Davis (Lexi Ainsworth) is being brainwashed by their victim-blaming mentality. Sam doesn’t approve and Alexis won’t either, but what can they do? Kristina is an adult who can make her own decisions. It’ll be tough to talk any sense into her when it comes to Shiloh Archer (Coby Ryan McLaughlin).

While Sam tries to figure something out, Dr. Kim Nero (Tamara Braun) will keep checking her phone. She’ll be alarmed when Oscar Nero (Garren Stitt) doesn’t get in touch as promised. Oscar will end up stuck in the catacombs with Josslyn Jacks (Eden McCoy), but it won’t be long until Jason Morgan (Steve Burton) saves them.

After Jason runs into a tight spot of his own, Sam will put her own bravery on display. Afterward, Jason and Sam will do some reflecting. They’ll end up making love, so GH fans will be eager to see where they go from here.

Elsewhere, Drew Cain (Billy Miller) will be relieved to know Oscar and Josslyn are safe. He’ll still have a chance to enjoy his remaining weeks with Oscar as planned and Joss can hopefully live a long life.

Across town, Charlotte Cassadine (Scarlett Fernandez) will need Laura Webber’s (Genie Francis) comfort. It looks like they’ll come together to support each other over Lulu Falconeri’s (Emme Rylan) attack.

Ryan Chamberlain (Jon Lindstrom) will apparently leave Lulu struggling to survive. When that news reaches Maxie West (Kirsten Storms), she’ll be both hopeful and heartbroken. This is sure to be a terrible time for Lulu’s family and friends. At the police station, Peter August (Wes Ramsey) will work with the cops. Jordan Ashford (Briana Nicole Henry) will be looking for any clue that might help.

During the week of January 28-February 1, it seems Ryan will hope to sneak in Lulu’s room and finish her off, but he won’t succeed. That’ll leave Ryan furious and a furious Ryan is a man to be feared!

Ava Jerome (Maura West) could be in trouble if she dares to go against Ryan’s wishes. Meanwhile, Laura will grow desperate for a miracle. She’ll just want Lulu to come back to the people who love her.

Back with Drew, General Hospital spoilers say he’ll grow closer to Kim and become rattled in the process. Drew will be taken aback by the feelings that are blooming. Next, Kristina will get a pleasant surprise. It appears Alexis may join in the next DOD seminar, so Kristina may think this will be good. She might feel like Alexis is keeping an open mind about Shiloh and his teachings.

Unfortunately, Alexis may walk away with even more doubts about this place and what it stands for. This could lead to more family conflict and alienate Kristina, who’s clearly losing her way. At Ferncliff, Dr. Kevin Collins (Jon Lindstrom) will get a visit from his brother. Ryan will undoubtedly brag about all the destruction he’s caused on the outside.

Finally, Liesl Obrecht (Kathleen Gati) will rev up the pressure. Valentin Cassadine (James Patrick stuart) will fret about Liesl blowing up the fake daughter secret, so let’s hope he can handle it. We’ll keep you posted as other General Hospital details emerge. Stay tuned to ABC’s GH and don’t forget to check CDL often for the latest General Hospital spoilers, updates and news.