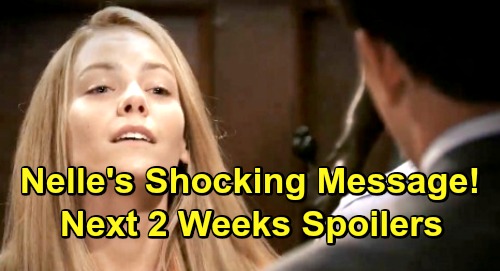 General Hospital (GH) spoilers for the next two weeks tease that some hot drama’s ahead in Port Charles. During the week of July 15-19, Kim Nero (Tamara Braun) and Julian Jerome (William deVry) will have an honest conversation. Will it just be to see how Kim’s doing with her therapy sessions or could there be more to the story?

It’s possible Julian and Kim will reevaluate their relationship during this chat. A lot changed when Oscar Nero Quartermaine (Garren Stitt) died, so Julian and Kim could be headed for a split. Even if it doesn’t happen right now, Kim and Julian’s love story doesn’t seem like it’s meant to be a lasting one.

Other General Hospital spoilers say Cameron Webber (William Lipton) will leave his mom taken aback. Cam was quite sweet to Elizabeth Baldwin (Rebecca Herbst) and Franco Baldwin (Roger Howarth) at their wedding reception. As he stood next to his little brothers, Cameron even called Franco their dad.

Will this nice trend continue when it comes to Franco? Cameron may have another wedding gift to pass along or just a surprise to show Liz he cares. Whatever the case, Liz will be taken aback by her son’s actions. Meanwhile, Harrison Chase (Josh Swickard) will have to break some bad news. Willow Tait (Katelyn MacMullen) may be the one forced to listen.

Will Shiloh be on the verge of wiggling out of trouble? Kristina Corinthos-Davis (Lexi Ainsworth) will be rocked later as Shiloh becomes desperate to get his life back on track. He’ll hope to be free from prison and gain custody of “Wiley Cooper-Jones,” so he should pull some dirty moves.

During the week of July 22-26, Valentin Cassadine (James Patrick Stuart) and Ava Jerome (Maura West) will face off. Ava will also seek out a second opinion, so she may end up disappointed in Sibley Gamble’s efforts to contact Kiki Jerome (Hayley Erin). Back with Cameron, he’ll do something to betray someone he cares about. He’ll leave a friend burned, so Trina Robinson (Sydney Mikayla) may be an option.

Other GH spoilers say Nelle Benson (Chloe Lanier) will stir the pot. She’ll make Michael Corinthos (Chad Duell) her victim once again as she taunts him from afar. Nelle will know exactly what she’s doing as far as the timing goes. It’ll be Jonah Corinthos’ birthday, so expect Nelle to get in touch with Michael and attempt to make his pain worst.

Elsewhere, General Hospital spoilers say Sasha Gilmore (Sofia Mattsson) will listen up. Michael will confess something to her, which could mean it’ll be something “Wiley” related or another a way they can deepen this relationship.

Sasha’s in for some pain when her secret blows up down the road! We’ll give you updates as other GH details emerge. Stay tuned to the ABC soap and don’t forget to check CDL often for the latest General Hospital spoilers, updates and news.