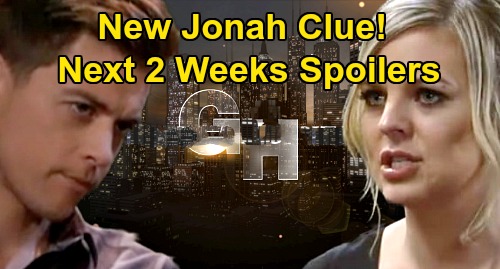 General Hospital (GH) spoilers for the next two weeks tease that big trouble is coming to Port Charles. During the week of September 2-6, Gladys Corbin’s sudden appearance will bring a little Corinthos clan chaos. Sonny Corinthos (Maurice Benard) will make it clear that Gladys, the cousin who’s posing as Dev Cerci’s (Ashton Arbab) grandmother, had better honor the terms of their agreement.

However, Gladys’ actual reason for visiting may be far more disturbing to Sonny. There’s bound to be more hiccups in this risky plan. Speaking of risky plans, Elizabeth Baldwin (Rebecca Herbst) has one. She intends to potentially have Franco Baldwin (Roger Howarth) committed in hopes of forcing him into the memory reversal. However, that’s another scheme that should come with huge snags!

Liesl Obrecht (Kathleen Gati) just might have the best strategy at the moment. Franco intends to leave town as soon as possible, so Dr. O will have to act fast. General Hospital spoilers say Liesl will take drastic action to get what she wants. Based on their last conversation, it wouldn’t be surprising at all to see Liesl snatch Franco and stash him somewhere.

Liz may give her full approval on a kidnapping and hostage situation. She needs time to work her legal angles, so this is a more immediate fix. Of course, there’s also a chance Liesl will keep her mouth shut and leave Liz to worry. It all depends on Liesl’s strategy and how she thinks is the best way to carry it out.

During the week of September 9-13, Liesl will take a break from the drama. She’ll join Nina Reeves (Cynthia Watros) and Valentin Cassadine’s (James Patrick Stuart) celebration, so it sounds like Hamilton Finn’s (Michael Easton) efforts to cure Sasha Gilmore (Sofia Mattsson) will be successful.

Other GH spoilers state that Michael Corinthos (Chad Duell) will observe something interesting. He’ll comment on it, so this likely has something to do with “Wiley Cooper-Jones.” Perhaps Michael will think the little fella looks like he did at that age or something along those lines. As this storyline heats up, we can expect more Jonah clues for Michael.

Brad Cooper (Parry Shen) will go into panic mode, and it looks like it’ll prompt a confession to Julian Jerome (William deVry). He’ll reveal “Wiley’s” true identity to an ally soon, and Julian makes sense considering he already knows a good chunk of the story. Plus, Brad will await Julian’s decision later. He’ll undoubtedly be wondering if Julian’s going to keep his secret or blow up his family.

Julian should opt to protect Lucas Jones’ (Ryan Carnes) heart and save Brad from Sonny’s wrath! He could be putting a target on his own back though! This secret is a ticking time bomb, and Sonny’s sure to explode down the road. Until then, let’s talk about “Lustin.” Dustin Phillips (Mark Lawson) will bump into Lulu Spencer (Emme Rylan), so the first rumblings of this romance will continue to develop.

Over with Maxie Jones (Kirsten Storms), she’ll contemplate a Crimson dilemma. Maxie will think they need another big “get” for the next cover. Ava Jerome (Maura West) may be a tough act to follow, but Maxie will brainstorm and hope to pull off another hit.

Finally, Jason Morgan (Steve Burton) will find himself struggling to sleep. He won’t get a wink, which suggest he’ll be worried sick about something. Will Jason fear Shiloh Archer’s (Coby Ryan McLaughlin) next move or perhaps fret over Carly Corinthos’ (Laura Wright) baby drama? Whatever the case, Jason will have a lot on his mind.