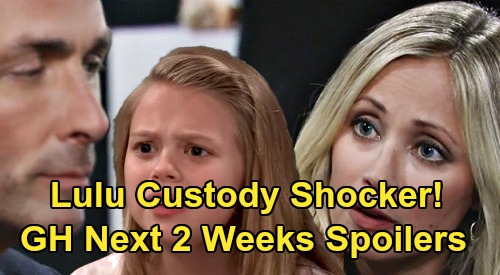 General Hospital (GH) spoilers for the next two weeks tease that some stunning moments are ahead. During the week of December 30 to January 3, Carly Corinthos (Laura Wright) will spill all to Sonny Corinthos (Maurice Benard). She’ll finally tell him all about Nikolas Cassadine (Marcus Coloma) being alive and how Jasper “Jax” Jacks (Ingo Rademacher) has been helping him.

This will give Sonny some serious dirt since Jax has committed a crime, but he needs to remember that Jax has dirt, too! Jax is in the loop on Sonny’s scheme to keep Dev Cerci (Ashton Arbab) from being deported, so Sonny had better think twice about crossing him. As for Dev, he’ll remain on Josslyn Jacks’ (Eden McCoy) mind. Now that Trina Robinson (Sydney Mikayla) has informed Joss of Dev’s crush, Josslyn will start seeing him in another light.

General Hospital spoilers say Joss and Dev will share a kiss eventually, but what about Cameron Webber (William Lipton)? Sadly, Josslyn won’t pay much attention to Cam’s feelings. He fell for Joss a long time ago, but he’ll be stuck pining for a while. However, Trina always has Cameron’s back and will make a secret pact with him soon.

Over with Nina Reeves (Cynthia Watros), she’ll get DNA evidence that confirms Valentin Cassadine (James Patrick Stuart) is a liar. Nina will be all set to dump Valentin at the altar, but two people will advise against it. Sasha Gilmore (Sofia Mattsson) will be rooting for love, but Jax will just be rooting against revenge. He just won’t think that’s the kind of person Nina wants to be.

The wedding will eventually kick off, but Nina’s decision about Valentin won’t be the biggest bombshell. It appears Nikolas’ survival will be exposed at the nuptials, so that’ll certainly bring major drama! During the week of January 6-10, Ava Jerome’s (Maura West) luck will take a surprising turn. Does that mean for the better? Ava won’t rest until she’s back on top, so let’s hope things keep looking up.

Other General Hospital spoilers say Michael Corinthos (Chad Duell) will face some worries. Could that be about Nelle Benson’s (Chloe Lanier) possible release? The last thing Michael wants is Nelle out of prison and near his family – particularly “Wiley Cooper-Jones” (Erik and Theo Olson).

Meanwhile, Elizabeth Baldwin (Rebecca Herbst) will get hit with a shocker. That may involve Nik’s survival and the fact that he drove Hayden Barnes (Rebecca Budig) out of town. GH fans can expect Liz to unleash her wrath on Nikolas down the road, so stay tuned for that confrontation.

Until then, Jason Morgan (Steve Burton) will be a busy man. He’ll reach out to Robert Scorpio (Tristan Rogers) for help, so that could mean the Peter August (Wes Ramsey) takedown efforts will rev up. Jason will also hope for a deal of some sort, so he’ll definitely have a lot going on.

As for Sam McCall (Kelly Monaco), she’ll do something that displeases Alexis Davis (Nancy Lee Grahn). Sam’s actions just won’t be something Alexis approves of. General Hospital spoilers say there’ll be some mother-daughter clashing while Lulu Spencer (Emme Rylan) gets ready for war.

Of course, Lulu and Laura Webber (Genie Francis) will have to process Nikolas’ return along with the knowledge that he hid his survival. General Hospital spoilers say they’ll have plenty to wrap their heads around! We’ll give you updates as other GH news comes in. Stick with the ABC soap and don’t forget to check CDL often for the latest General Hospital spoilers, updates and news.