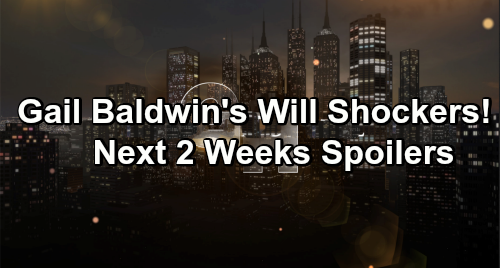 General Hospital (GH) spoilers for the next two weeks tease that several Port Charles residents will battle concerns. During the week of January 7-11, Sam McCall (Kelly Monaco) will fear for Kristina Corinthos-Davis’ safety and well-being. It looks like she’ll open up about her fears to Alexis Davis (Nancy Lee Grahn), but her mom will be hesitant to overstep and enrage Kristina again.

Unfortunately, Kristina will begin distancing herself from her family more and more. That lines right up with the cult mentality. Shiloh (Coby McLaughlin) aka Hank should love that Kristina’s devoting herself and all her time to DOD.

General Hospital spoilers say Shiloh will pull Oscar Nero (Garren Stitt) deeper into this community as well, but Kim Nero (Tamara Braun) will mainly be focused on his health.

While Jason Morgan (Steve Burton) seeks the real story behind Hank, Kim and Drew Cain (Billy Miller) will consider what’s next. Julian Jerome (William deVry) and Sam aren’t standing in the way of “Krew” at this point. Should Drew and Kim consider a future together? They’ll mull over what that would be like and try to sort this mess out.

During the week of January 14-18, GH spoilers say Drew will get a disturbing warning. Jason’s digging will lead him to believe Shiloh’s a real threat. Over with Alexis, she’ll call a meeting to discuss Gail Baldwin’s (Susan Brown) will. There’ll be some surprises in store as Scott Baldwin (Kin Shriner), Laura Collins (Genie Francis) and Monica Quartermaine (Leslie Charleson) gather for updates.

Other General Hospital spoilers say Mac Scorpio (John J. York) will be worried about Maxie West (Kirsten Storms). He’s starting to trust Peter August (Wes Ramsey) a bit more, so he’ll ask for his help. Mac will want Peter to keep an eye on Maxie – most likely to keep her safe from PC’s latest serial killer.

Speaking of that killer, GH fans can expect Ryan Chamberlain (Jon Lindstrom) to add another name to his list of victims. He’ll find someone he wants to do away with, but who will it be? Carly Corinthos (Laura Wright) will be summoned for an important appointment, so there’s a chance Kevin will want her out of his hair. He probably won’t succeed in killing Carly, but she could definitely be in danger.

Next, Mike Corbin’s (Max Gail) condition will head downhill fast. Sonny Corinthos (Maurice Benard) will be broken up about it, but there’s nothing he can do. Mike will continue to decline, so Sonny will just have to hang in there and give his dad as much support as possible.

Finally, Willow Tait (Katelyn MacMullen) will leave Julian on edge. She’ll do something that makes him question her motives, so it sounds like trouble’s looming for Brad Cooper (Parry Shen) and Lucas Jones (Ryan Carnes). We’ll keep you posted as other GH news comes in. Stay tuned to the ABC soap and don’t forget to check CDL often for the latest General Hospital spoilers, updates and news.