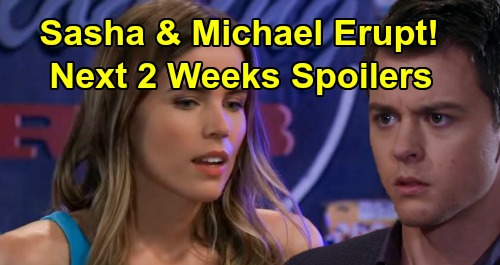 General Hospital (GH) spoilers for the next two weeks tease that things are about to heat up in Port Charles. During the week of October 21-25, Laura Webber (Genie Francis) and Curtis Ashford (Donnell Turner) will have another brainstorming session. They’ll put their heads together and see if they can make some progress on this codicil hunt.

Over with Ava Jerome (Maura West), she’ll try to regain some sense of normalcy. Ava was incredibly rattled after learning Ryan Chamberlain (Jon Lindstrom) killed his cellmate because of her. She’s reeling over Ryan’s continued infatuation, but she’ll try to put that out of her mind for a while. Ava will head back to the art gallery and concentrate on work as best as she can.

Other General Hospital spoilers say Franco Baldwin’s (Roger Howarth) hearing will begin. Jordan Ashford (Briana Nicole Henry) will touch Elizabeth Baldwin’s (Rebecca Herbst) heart on the stand. As Martin Gray (Michael E. Knight) sells the story of Drew Cain (Billy Miller) the hero who should remain one, Jordan and Cameron Webber (William Lipton) will insist that Franco was a hero, too. He overcame his past and has done plenty of good deeds.

During the week of October 28-November 1, Brad Cooper (Parry Shen) won’t be able to avoid the inevitable. After a string of excuses and delays, Brad will have no choice but to attend couples’ therapy with Brad. General Hospital spoilers say Brad will definitely have concerns. Opening up is hard anyway, but it’s especially tough when you’re trying to hide a stolen baby.

Over with Liz, she’ll face deep despair. That may be due to Scott Baldwin (Kin Shriner) losing the Franco case. Regardless, Scott won’t give up hope. GH fans can expect Sonny Corinthos (Maurice Benard) to come through for Franco in a surprising way, so don’t miss what’s in store.

Meanwhile, Michael Corinthos (Chad Duell) and Sasha Gilmore (Sofia Mattsson) will hit a hurdle. They’ll end up getting into an argument, so things won’t remain rosy for these two. Back with Ava, she’ll sense that she’s being followed after the Metro Court’s Halloween party. Ava will end up at the gallery, and a masked man won’t be far behind.

General Hospital spoilers say this mysterious guy will ultimately reveal himself. Soon after, Laura will express doubt. Could that mean Nikolas Cassadine (Tyler Christopher) is the mystery man? Laura would certainly doubt Ava’s claims if she presented them, especially since Ava’s been so out of sorts lately.

Regardless, there’ll be more Halloween drama as Josslyn Jacks (Eden McCoy) runs into trouble along with Cameron. As for Alexis Davis (Nancy Lee Grahn), she’ll spend the evening battling the flu. Maybe the good doctor – Dr. Neil Byrne (Joe Flanigan), that is – will stop by with soup or at least support. However, what Alexis considers the flu may actually be the early effects of Kendra Lennon’s (Michelle Argyris) supplement!

Julian Jerome (William deVry) will be busy going against Brad’s plan and potentially making matters worse for both of them. General Hospital spoilers say some great action’s on the way, so stay tuned. We’ll give you updates as other GH news comes in. Stick with the ABC soap and don’t forget to check CDL often for the latest General Hospital spoilers, updates and news.