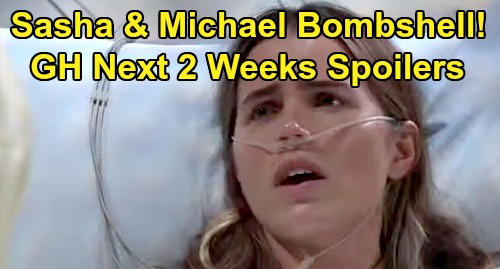 General Hospital (GH) spoilers for the next two weeks tease that some big surprises are in store. During the week of August 26-30, Michael Corinthos (Chad Duell) and Sasha Gilmore (Sofia Mattsson) will be rocked by a major revelation. Nina Reeves (Cynthia Watros) will receive a selfie from Cassandra Pierce (Jessica Tuck) – the same one Cassandra took when she posed with her new “friends” on the island.

It won’t be long until Michael heads to the police station with Sonny Corinthos (Maurice Benard). They’ll try to figure out what’s being done to find Cassandra. As for Sasha, she’ll remain in bad shape. Hamilton Finn (Michael Easton) will get a series of test results that leave him even more shocked than before. Could Valentin Cassadine’s (James Patrick Stuart) secret be on the verge of exposure?

It looks like Cassandra will be a bigger concern than Sasha at the moment, but the threat Sasha’s illness poses won’t leave Valentin’s mind. Next, Alexis Davis (Nancy Lee Grahn) will deal with some embarrassment. When it comes to Neil Byrne, Alexis always seems to put her foot in her mouth or make a move she regrets. There’s a good chance Neil will be the reason for Alexis’ humiliation.

However, Molly Lansing-Davis (Haley Pullos) could also tie in here. Alexis will get busted for snooping this week, and Molly will be the one doing the busting! She may catch Alexis sniffing around for more Neil info. Over with Shiloh Archer (Coby Ryan McLaughlin), he’ll make some cryptic comments. There’s no word on who he’ll make them to, but Peter August (Wes Ramsey) or Nelle Benson (Chloe Lanier) seem like the best options.

Speaking of Nelle, she’ll find herself entertained during the week of September 2-6. Nelle is only amused by the misery of others and her own attempts to get ahead. This has to involve some sort of scheme that will benefit her.

Other General Hospital spoilers say Franco Baldwin (Roger Howarth) will make a desperate plea. He’ll get choked up as he delivers it, so it’ll probably be a plea for Kim Nero’s (Tamara Braun) love. Franco may acknowledge that he’s in a different body, but these are Drew Cain (Billy Miller) memories. He might push Kim to view that as enough.

Across town, Cameron Webber (William Lipton to step up as the man of the house. He’ll try to pick up the slack and be there for his family. Unfortunately, the pressure will really get to Cam later. He’ll lash out at someone and it might be Franco. Although Cameron feels guilty for Franco’s predicament, he might be confrontational if Franco makes hurtful comments to Elizabeth Baldwin (Rebecca Herbst).

Next, Gladys will make an unexpected Port Charles arrival. She’s Mike Corbin’s (Max Gail) cousin and the woman Sonny paid as part of his Dev Cerci (Ashton Arbab) plot. Gladys is posing as Dev’s grandmother, but what will she want on Tuesday, September 3? Will she come sniffing around for more money?

It sounds like the next two weeks will be packed with juicy General Hospital drama. We’ll give you updates as other GH news comes in. Stay tuned to the ABC soap and don’t forget to check CDL often for the latest General Hospital spoilers, updates and news.