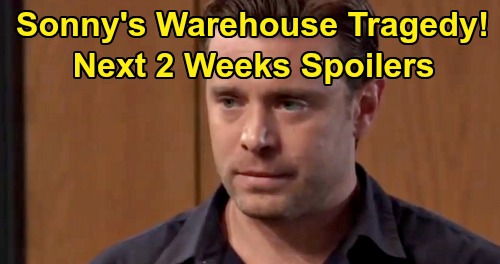 General Hospital (GH) spoilers for the next two weeks tease that the drama will heat up in Port Charles. During the week of August 19-23, Maxie Jones (Kristen Storms) will get a request for help. Liesl Obrecht (Kathleen Gati) will hope Maxie’s willing to pitch in on something, so this may involve that dinner Hayden Barnes (Rebecca Budig) promised her with Jasper “Jax” Jacks (Ingo Rademacher).

Perhaps Liesl will want some style suggestions or something along those lines. She’s quite smitten when it comes to Jax, so she won’t want to blow her shot. Over with Josslyn Jacks (Eden McCoy), she’ll pitch an idea to Carly Corinthos (Laura Wright). Josslyn will likely be planning something special for Dev Cerci (Ashton Arbab). They bonded after Dev opened up a bit, but Joss would love for him to truly let his walls down.

Other General Hospital spoilers say Ava Jerome (Maura West) will have a baffling dream. She’ll awaken startled and unsure of what this dream means. Ava might be haunted by Kiki Jerome (Hayley Erin) in her sleep, but there’s also a possibility this will involve some sort of Nikolas Cassadine (last played by Nick Stabile) premonition. She was curious about him, so maybe we’ll get another hint about the danger Nik’s in.

Meanwhile, Shiloh Archer (Coby Ryan McLaughlin) will push someone for a trade. He’ll have information, but he needs his freedom. Shiloh will count on somebody to come through for him, which could set up Billy Miller’s (Drew Cain) exit drama.

General Hospital spoilers say Drew will race to locate Cameron Webber (William Lipton), so he’ll obviously believe the teen’s in trouble. Whether Drew fears Cam will be hurt or might go after Shiloh, there’ll be major concerns. During the week of August 26-30, Sonny Corinthos (Maurice Benard) will get some surprising news. He’ll hear about a warehouse issue that troubles him, so he may want to check it out ASAP.

Will Drew wind up at the warehouse and run into problems? Shiloh may or may not be involved here, but the show could be setting up a presumed death either way. During the week of August 26-30, GH fans can expect a tough heart-to-heart between Jason Morgan (Steve Burton) and Monica Quartermaine (Leslie Charleson). That could be when Jason delivers devastating news about Drew’s outcome.

Next, Michael Corinthos (Chad Duell) will be taken aback before rushing to the PCPD with his father. This may tie back to that warehouse issue we mentioned or some other crisis that erupts. Sonny and Michael will definitely be looking for some answers.

Meanwhile, Curtis Ashford (Donnell Turner) will be offered a ton of cash. After Nina Reeves (Cynthia Watros) gets a stunning text – presumably that selfie from Cassandra Pierce (Jessica Tuck) – Valentin Cassadine (James Patrick Stuart) will push Curtis to tackle a project for him. He may task Curtis with finding Cassandra, which Curtis will likely agree to since the price will be right.