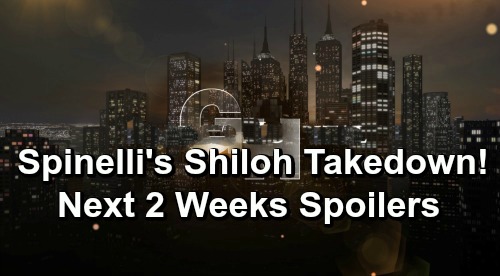 General Hospital (GH) spoilers for the next two weeks tease that some troubling moments are coming up. During the week of May 13-17, Robert Scorpio (Tristan Rogers) will realize he’s made a massive mistake. He won’t be able to find Dr. Hamilton Finn’s (Michael Easton) engagement ring anywhere, which will be a huge problem since Finn wants it back immediately.

Mike Corbin (Max Gail) currently has the ring, but it’ll be a while before it’s returned to its rightful owner. Over with Carly Corinthos (Laura Wright), she’ll have to take a trip to GH.

Jason Morgan (Steve Burton) will insist on driving Carly there, so there may be some urgent baby crisis that needs to be addressed. Carly will await some test results later. She’ll hope for positive updates after all the drama.

Other General Hospital spoilers say Laura Webber (Genie Francis) and Curtis Ashford (Donnell Turner) will land in a tight spot. Their jam will leave them wondering what their next move should be.

This will undoubtedly be related to Ryan Chamberlain (Jon Lindstrom) and their desperate hunt to track him down. It seems likely that Ryan will make a bloody Nurses Ball appearance soon enough.

Speaking of the Nurses Ball, it’ll kick off on the new GH episode Friday, May 17, and continue into the week of May 20-24. General Hospital spoilers say there’ll be plenty of mayhem to tune in for. Kristina Corinthos-Davis (Lexi Ainsworth) will end up lashing out at Sam McCall (Kelly Monaco).

Word has it Shiloh Archer (Coby Ryan McLaughlin) may attend the Nurses Ball with Sam as her request. That could leave Kristina wondering what Sam thinks she’s doing.

Sadly, Sam will ultimately find herself in a situation that leaves her vulnerable. She’ll be in too deep, so that’ll bring some close calls with Shiloh. Over with Lucas Jones (Ryan Carnes), the pieces will finally come together. Lucas will most likely determine that Willow Tait (Katelyn MacMullen) is the birth mother of Wiley Cooper-Jones.

That’s true, but they obviously don’t have the real Wiley anymore. He died shortly after being brought home from the hospital, so Brad Cooper (Parry Shen) swapped him with Nelle Benson’s (Chloe Lanier) healthy baby.

General Hospital spoilers say secret will continue to weigh on Brad. He’ll bring even more pressure once Lucas figures out who Willow is and blasts Brad for keeping secrets.

Elsewhere, Bradford Spinelli (Bradford Anderson) will await the signal. He’ll finally be given the go-ahead to carry out his part in a scheme, so he’ll undoubtedly be stepping up for Jason and Sonny Corinthos (Maurice Benard).

Spinelli may play a crucial role in Shiloh’s takedown, which Sonny will try to make happen ASAP. He’ll seek a risky deal that could change everything, so don’t miss that shocker.