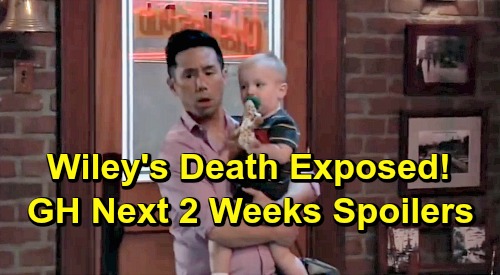 General Hospital (GH) spoilers for the next two weeks tease that some tough moments are coming up for several Port Charles residents. During the week of July 1-5, Carly Corinthos (Laura Wright) will suffer through a difficult night. She won’t be able to sleep, so she’ll probably have her unborn child’s condition on her mind.

Carly’s doctor suggested the baby seems to have spina bifida, so Carly may spend this time mulling over terrible possibilities. Meanwhile, someone mysterious will prepare to make a comeback. Since that someone will be female and we know Hayden Barnes (Rebecca Budig) is coming home, she seems to fit the bill here. GH fans can expect Hayden to make a grand entrance once she’s ready.

Over with Alexis Davis (Nancy Lee Grahn), she’ll get some surprising news. Kristina Corinthos-Davis (Lexi Ainsworth) will want to work through any unresolved issues with her mom. She’ll count on Neil Byrne (Joe Flanigan) to help them both out. Alexis may be skeptical of this actually working, but she may appreciate Kristina making the effort. That alone will show Alexis they’ve come a long way.

Next, Sonny Corinthos (Maurice Benard) will await updates from Brick. He’ll hope Dev’s (Ashton Arbab) legal jam will be resolved by the time he gets his next phone call. Josslyn Jacks (Eden McCoy) will inevitably get to know Dev a bit better. They’re living under the same roof now, so they’ll have plenty of chances to bond.

Unfortunately, that could leave Cameron Webber (William Lipton) feeling left out. He’ll battle some awkwardness around Josslyn in the coming episodes. During the week of July 8-12, Franco Baldwin (Roger Howarth) and Elizabeth Baldwin (Rebecca Herbst) will enjoy their wedding reception. It’s sure to bring some real shockers, but they’ll just have to roll with the drama.

General Hospital spoilers point to Liesl Obrecht (Kathleen Gati) confiding in Franco and perhaps spilling a bit too much. Liesl is the keeper of some huge secrets, so she could spark real trouble for quite a few people. It looks like Liesl may set up some tight spots for Valentin Cassadine (James Patrick Stuart) and Sasha Gilmore (Sofia Mattsson) this time.

While Sasha makes a risky decision, Nina Reeves (Cynthia Watros) will find her groove with Jasper “Jax” Jacks (Ingo Rademacher). They recently ran into some snags in their working relationship, but they’ll get things back on track – much to Valentin’s dismay! However, Curtis Ashford (Donnell Turner) should get the goods on Jax eventually and leave Valentin feeling better about the situation.

As for Bobbie Spencer (Jacklyn Zeman), all eyes will be on her. It appears Bobbie may faint again, so she may struggle to manage her type 2 diabetes. Scott Baldwin (Kin Shriner) will refuse to leave Bobbie’s side, so she should be grateful for the support.

Other General Hospital spoilers Oscar Nero Quartermaine’s (Garren Stitt) will reading will get pretty wild. Will Shiloh Archer (Coby Ryan McLaughlin) cause some chaos? Regardless, it looks like “Wiley Cooper-Jones” will be exposed as a substitute baby which means the reveal of poor Wiley’s death is around the corner as well. A rattled Lucas Jones (Ryan Carnes) will lean on Sam McCall (Kelly Monaco) as he tries to wrap his head around all this.

Finally, Jason Morgan (Steve Burton) will offer a warning. He’ll feel like Sonny doesn’t have a grip on things and is losing control, so he’ll hope to help him deal with a problem. Will this involve Dev, Shiloh, the baby or something else? Sonny’s involved in several storylines, so it’ll be interesting to see what the issue is.