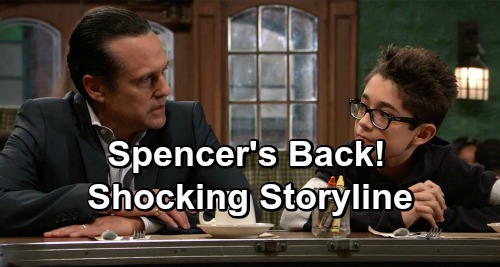 General Hospital (GH) spoilers reveal that a familiar face is headed back to the ABC soap. Nicolas Bechtel was spotted on set again, so it won’t be long until he makes his return as Spencer Cassadine. When we last saw Spencer, he was keeping a huge secret. Spencer tampered with the election so Laura Webber (Genie Francis) would have more time to run a successful campaign and pull off a win.

The good news is Spencer’s plan paid off. The bad news is the threat’s still hanging over him. Valentin Cassadine (James Patrick Stuart) knows what the kid was up to, so that’s always a risk. Spencer considers Valentin to be his worst enemy. Since Valentin killed Spencer’s father, Nikolas Cassadine (last played by Nick Stabile), Spencer’s always going to hold a grudge.

Of course, Valentin’s always going to have leverage if the truth about the election stays under wraps. Sonny Corinthos (Maurice Benard) is also aware of the drama, but he gets that Spencer wasn’t behaving maliciously. He can relate to wanting something and using the wrong tactics to get it. Sonny’s lips are sealed, so Spencer won’t have to worry about him.

However, Spencer’s own conscience could be a problem. Ned Quartermaine (Wally Kurth) would’ve no doubt won this election if it hadn’t been for Spencer. The tampering was the only reason Laura had time to grow support. Will Spencer be tempted to come clean to his grandmother? Will that be part of the drama he’s back for?

Time will tell, but General Hospital spoilers say Spencer will definitely find some trouble to get into. That’s typical for any Spencer stint! It turns out Spencer could have some tender moments, too. GH fans know Spencer and Charlotte Cassadine (Scarlett Fernandez) don’t usually get along, but that could change soon.

Charlotte will likely be dealing with a lot thanks to Ryan Chamberlain’s attack on Lulu Falconeri (Emme Rylan). Perhaps Spencer can offer comfort and prove he’s still got a softer side. Spencer can be a real sweetheart when he wants to be!