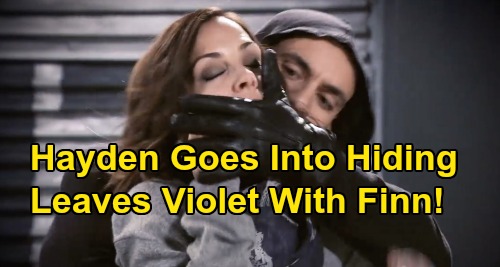 General Hospital (GH) spoilers tease that Hayden Barnes (Rebecca Budig) will face off with Valentin Cassadine (James Patrick Stuart). It looks like Valentin will want some answers about whatever Hayden and her partners in crime are up to. Valentin can tell something’s brewing – and he’s only going to get more suspicious after Charlotte Cassadine’s (Scarlett Fernandez) Wyndemere encounter.

Charlotte will find Nikolas Cassadine (Marcus Coloma) and question what he’s doing in her living room. She doesn’t know who Nik is, so she won’t be able to give her papa a name later. However, Charlotte may be shaken up over the run-in. After all, Charlotte just got kidnapped by a dangerous international criminal. Her ordeal with Cassandra Pierce (Jessica Tuck) has everyone in her family on high alert, including Valentin.

General Hospital spoilers say Valentin will take steps to protect himself as well as the people he loves. He’ll end up warning Hayden that if she doesn’t cooperate, things are going to get unpleasant. Hayden’s not the kind of gal who scares easily, so she’ll hold her own against Valentin. She’ll make it clear that he’s not going to be bullied, but she’ll still get nervous down by the pier later.

There’s a good chance Hayden will feel like she’s being watched. It won’t be long until someone tries to snatch her! Hayden will manage to escape this near abduction, but she’ll obviously suspect Valentin was behind it. When Hayden takes her concerns to Nikolas, he’ll agree that the goon must’ve been on Valentin’s payroll.

Unfortunately, Nikolas will think there’s only one solution. He’ll advise Hayden to leave Port Charles and go into hiding for her own safety. Of course, there’s the little matter of her daughter to consider! How can Hayden take off with Violet Barnes (Jophielle Love) when Violet’s just met her daddy? And what about Finn’s feelings? How can Hayden rip Violet from Finn’s life now?

It’s possible Hayden will choose to take Violet with her, but she may decide it’d be safer to leave her behind. GH buzz has been hinting that Hayden might be on her way out, so these General Hospital spoilers certainly back up that idea. Hayden could return after all the Nikolas drama blows up, but this seems like an easy exit strategy for the time being.

From a drama standpoint, it makes more sense for Hayden to leave Violet with Finn and let him navigate things on his own for a while. That would definitely shake up Finn’s relationship with Anna Devane (Finola Hughes) – far more than he even expected!

Regardless, some exciting developments are coming up. We’ll give you updates as other GH news emerges. Stay tuned to the ABC soap and don’t forget to check CDL often for the latest General Hospital spoilers, updates and news.