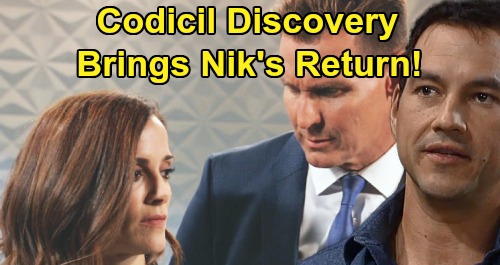 General Hospital (GH) spoilers tease that the search for the codicil to Mikkos Cassadine’s (John Colicos) will is really heating up. As GH viewers know, Laura Collins (Genie Francis) and Kevin Collins (Jon Lindstrom) recently spent some time at Wyndemere, during which they became quite interested in a portrait of Helena Cassadine (Constance Towers) that happened to be sitting around. They gleaned some clues from the portrait, and they’re still trying to figure out what they all mean.

Laura will no doubt share her findings with Curtis Ashford (Donnell Turner), Hayden Barnes (Rebecca Budig), and Jasper “Jax” Jacks (Ingo Rademacher) soon, but where is all this going? One interesting piece of the story is that Laura and Curtis have been assuming that Spencer Cassadine (Nicolas Bechtel) might be the impetus behind the search for the codicil. After all, he would be the logical person who would stand to benefit, since he’s the only other Cassadine who could be eligible to inherit the family fortune.

There’s been a lot of talk about Spencer lately, and both Laura and Curtis have separately voiced the opinion that the codicil must name Spencer as the rightful heir of the Cassadine fortune. Hayden and Jax have been present when such assumptions have been made, but they certainly haven’t verified that Spencer is the person they’re working with. In fact, Hayden and Jax have made several references to their “silent partner” without referring to his or her identity.

But there has been a lot of talk on the show lately of another Cassadine…Nikolas Cassadine (last played by Nick Stabile). And that has led to much General Hospital buzz about whether Nikolas could somehow be alive and orchestrating the whole codicil search with Hayden and Jax. Of course, Nikolas allegedly died after being shot by Valentin Cassadine (James Patrick Stuart), but what if he actually survived?

If that were the case, it would explain quite a bit. GH viewers will remember that when Ava Jerome (Maura West) was going through her psychic phase and trying to communicate with Kiki Jerome (Hayley Erin), she attempted to have one of the psychics, Sibley Gamble (Veronica Cartwright) communicate with Nikolas. However, Sibley wasn’t able to detect Nikolas’ presence among the “departed.”

And when Laura met with Ava’s other psychic, Chelsea Lam (Jen Ray), she received a bizarre reading about her son being in danger. Laura naturally assumed that Chelsea was referring to her living son, Lucky Spencer (Jonathan Jackson), whom she immediately called to make sure he was ok. She brushed the incident aside, but many GH viewers took it to mean that Nikolas might indeed be alive somewhere and in danger.

And then there was the mystery Cassadine man who was present in the car with Cassandra Pierce (Jessica Tuck) when she was brought out of her coma by Hamilton Finn (Michael Easton). General Hospital spoilers have been hinting for a while at what that was all about – and now Cassandra is back in Port Charles. Her first call was to Laura and she seemed to want to strike a deal with her, which was an interesting move.

At any rate, it seems that there are plenty of clues here to indicate that Nikolas could be alive and the person who is working with Hayden and Jax (and now indirectly with Laura herself). And if he’s indeed interested in finding a codicil to Mikkos’ will, then it’s possible that he himself could be named as the heir to the Cassadine fortune, or he could think that Spencer is named – but either way, it would make sense.

What do you think? Could Nikolas be alive and working from afar with Hayden and Jax? Stay tuned to the ABC soap and don’t forget to check CDL often for the latest General Hospital spoilers, updates, and news.