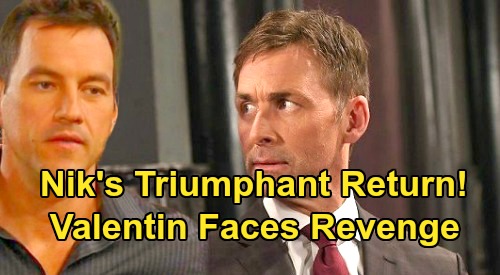 General Hospital (GH) spoilers tease that Hayden Barnes (Rebecca Budig) will think it’s time to rev up the search efforts. She’s ready to finish this mission ASAP, so she’ll try to light a fire under Jasper “Jax” Jacks (Ingo Rademacher). Hayden and Jax intend to find the codicil to Mikkos Cassadine’s (John Colicos), which will prove Valentin Cassadine (James Patrick Stuart) isn’t the rightful heir he claims to be.

Hayden will think there’s one person on canvas that she trusts and can earn the trust of in return. That person is Curtis Ashford (Donnell Turner), but Jax will be leery since Curtis got busted working for Valentin – the very man at the center of their takedown plot. Even so, Hayden will think they can’t blow this opportunity. Curtis has some serious skills and could help them out, which means Jax will allow him to join their hunt.

However, even Curtis may not be enough to track down this codicil. General Hospital spoilers reveal that other Port Charles residents will get involved along the way. There’s no word on how many or which ones, but we know for sure Laura Webber (Genie Francis) will land in the middle of the action.

It’s possible Jax and Hayden will ask for Laura’s assistance, but it’s also possible she’ll just put some clues together and offer it. Whatever the case, Laura won’t be far from the situation – which makes sense considering it seemingly surrounds her son and grandson.

When Curtis learns Valentin may not be the rightful heir, his mind will immediately go to Spencer Cassadine (Nicholas Bechtel). Since Nikolas Cassadine (last played by Nick Stabile) is believed to be dead, Curtis will feel like Spencer is set to inherit the fortune. Of course, all the latest GH hints tell us that Nikolas almost certainly isn’t deceased. That’s a great reason for Laura to find herself at the center of this story soon.

General Hospital spoilers say there’ll likely be more of those hints as time goes on. The show seems to be building to a major comeback, so it’ll be interesting to see how it all plays out. We seem poised to witness Nikolas’ triumphant return from the dead and a revenge blow like Valentin has never seen before!

Are you looking forward to all this Nik drama? Do you want to see Valentin’s downfall? We’ll give you updates as other GH news comes in. Stay tuned to the ABC soap and don’t forget to check CDL often for the latest General Hospital spoilers, updates and news.