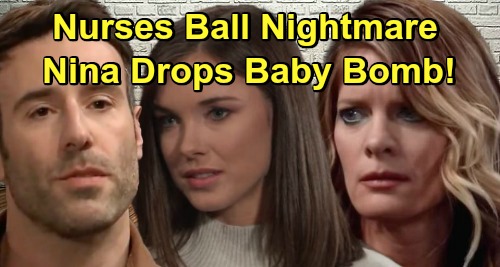 General Hospital (GH) spoilers tease that Nina Reeves (Michelle Stafford) will hit below the belt. She’ll strike a blow and there’s a good chance it’ll be to Willow Tait’s (Katelyn MacMullen) heart. GH fans can expect more issues at school soon enough. You can bet Nina will be clashing with Willow as usual, so that’ll add to their conflict.

Willow’s bond with Michael Corinthos (Chad Duell) has also left Nina irked. She wants Sasha Gilmore (Sofia Mattsson) to stick around, so she’s really rooting for love to bloom between Sasha and Michael. If Willow gets in the way, Sasha might be more inclined to leave town. That’s why Nina will keep an eye on the situation and undoubtedly let Willow know if she gets too close again.

During the week of May 20-24, GH spoilers say Willow will hope to keep the peace. She’ll also want to put the Shiloh Archer (Coby Ryan McLaughlin) stress on hold and most likely enjoy attending the Nurses Ball. Harrison Chase (Josh Swickard) may hope he can treat Willow to a wonderful night, but will Nina spoil the fun?

General Hospital spoilers say Nina will do serious damage with her words. It’s possible she’ll do some digging due to the Sasha situation. It makes sense for Nina to size up the competition. With Valentin Cassadine’s (James Patrick Stuart) resources, Nina could easily learn things to throw in Willow’s face.

Nina might find out about Willow’s involvement in Dawn of Day or even that she gave up a baby for adoption. Since Willow attended those bereavement group meetings, that could be an angle for Nina to work. She doesn’t have the whole story, so she could act like Willow played the part of a grieving mom to lure Michael. Nina might suggest that Willow actually abandoned her baby.

Would it be sinking awfully low? Sure, but a low blow is exactly what General Hospital spoilers are hinting at. Plus, it’d tie in with Nina’s storyline. Willow was forced to give up her child due to terrible circumstances. The same was true for Nina in a way. Since it appears Shiloh may attend the Nurses Ball with Sam McCall (Kelly Monaco), he may be around to witness or overhear the baby shocker.

Whatever the case, Shiloh has to find out about the kid he had with Willow. Nina is seemingly going to drop a Nurses Ball bomb. Since they’re likely mother and daughter, Willow needs an epic reason to hate Nina even more. When you add all this up, it could mean Nina will play a role in exposing one of Willow’s secrets. Even if she simply provokes Willow into spilling something on her own, it’ll be Nina’s fault that it turns into a scene.

Will Nina cross the line? Will she blow up Willow’s world without having the full picture? We’ll give you updates as other GH news comes in. Stay tuned to the ABC soap and don’t forget to check CDL often for the latest General Hospital spoilers, updates and news.